Texas state representative Drew Springer held a town hall on Tuesday at the Wilbarger Auditorium where he discussed the recent legislative session and answered questions from the two dozen or so citizens in attendance.
“We’re putting more money into rural Texas. We know we haven’t done a good job of that in the past,” Springer said.
Springer began by pointing to the school finance reform that passed.
“Every single school district in the state is getting more revenue from the state,” he said. “We also changed the transportation code, which will really benefit the really small schools.”
Springer said that $250 million was added to county road funding and he expected Wilbarger County to receive up to $300,000.
He said the jail standards were amended so that required upgrade for jails with less than 200 inmates will be granted back “so the taxpayers of Wilbarger County don’t have to pay those.”
Springer said he was happy two local issues passed. One was that the Wilbarger Hospital District no longer will require perspective board members to collect 100 signatures to run for office.
The Second was a hotel occupancy tax of 2 percent for Wilbarger County.
“My argument on that is I stay in lots of hotels … never once have I asked what the hotel tax is. I always see it the next day,” he said.
A state TxDOT employee questioned Springer on why the legislature has not given state employees a pay raise in six years. Dustin Fratacelli said that the state budget was increasing 16 percent but no funding was allocated for state employee raises.
Springer agreed. “I think it’s going to cause us problems. We’re going to lose state employees. You’ve got to pay a competitive wage.”
Springer said he expects that it will be a priority in the next legislative session. He said they would also look at why so many state jobs were in Austin, and if some more could be done by telecommuting.
Wilbarger General Hospital CEO Dennis Jack thanked Springer for working on Medicare inpatient reimbursement, but asked if the same could be done for outpatient reimbursement. Springer said he would look into it.
VISD superintendent Jeff Byrd said he appreciated the extra state funding that allowed teacher raises. But he said there was a misconception, fueled by state leaders, that every teacher would get a $5,000 raise. He said he had been hopeful that the increased funding could lower the pay gap between VISD and WFISD, but it had increased the gap. He said he currently needed 11 teachers for next year. Byrd said the legislature had penalized retirees that might be willing to come back. Springer said that he also did not know why the state senate had brought that into the bill.
Springer said he would look into the teachers’ insurance issue, called horrendous in the meeting, as well. 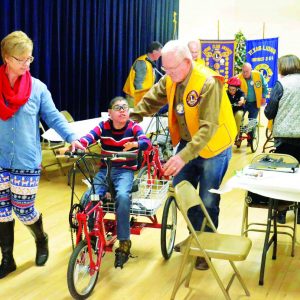 Star Trees go up in Vernon