Last week, Texas Department of Public Safety (DPS) Corporal Joshua Moer was honored by members of the Texas Senate and Texas House of Representatives for being named the IACP/Motorola Solutions 2018 Trooper of the Year. Cpl. Moer was selected for Trooper of the Year following his heroic actions in saving the life of a young woman in Wilbarger County in April 2018. The Legislature presented resolutions (Senate and House) honoring Cpl. Moer on Monday.
“Corporal Moer displayed courage as he took decisive action to save a young woman’s life last year, and I am proud of his service and sacrifice as he works to protect and serve his community every day,” said DPS Director Steven McCraw. “On behalf of the entire the entire DPS family, I want to congratulate Corporal Moer again on receiving this prestigious award.”
The International Association of Chiefs of Police (IACP) and Motorola Solutions selected Cpl. Moer as Trooper of the Year in March after he was named one of four finalists from a list of commissioned officers across the U.S. and Canada.
In October 2018, members of the Public Safety Commission honored Cpl. Moer, Texas Highway Patrol-Wichita Falls, with a Medal of Valor — the highest honor and award bestowed by DPS — and a Lifesaving Award for the same incident recognized by IACP and Motorola Solutions. On April 26, 2018, Cpl. Moer saved a young woman who was kidnapped by her estranged boyfriend in Norman, Oklahoma, and taken to Texas. Several law enforcement agencies were involved in a vehicle pursuit of the suspect, which eventually ended in Wilbarger County, just south of Vernon. Cpl. Moer was the lead unit. As the suspect vehicle came to a stop, the victim exited the car in an attempt to escape. The suspect went after her, tackling her to the ground and stabbing her repeatedly. Cpl. Moer immediately engaged the suspect and discharged his weapon in an attempt to stop the assault and neutralize the suspect. The suspect died at the scene.
Cpl. Moer assisted in providing first aid to the victim who was stabbed more than a dozen times. She spent several days in intensive care and thankfully survived the attack. 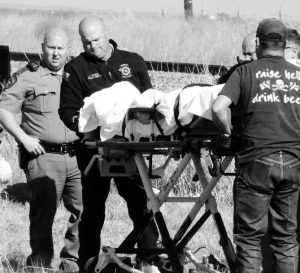 Texas Department of Public Safety Corporal Joshua Moer (left) was recognized by the Texas State legislature last week after being named North America Trooper of the Year. He was honored following an incident in Wilbarger County on U.S. 287 in April, 2018 when he shot a kidnapper who was stabbing his victim.
Daniel Walker/Vernon Record