Daniel Walker
Vernon Record
D-Day, the allied invasion to liberate France occurred 75 years ago Thursday, on June 6, 1944.
The Vernon Daily Record reported the headline “Vernon observes Invasion Day.”
The story reported: “News of the invasion of Western Europe came to Vernon Tuesday morning at 3 o’clock. Most residents heard the fire siren and church bells, but some did not know of the Allied actions until newsboys woke them with shouts of “Extra! … Extra!”
“Thirty minutes following the signal, churches began special prayer services. Most churches had large congregations of silent, calm worshippers, with here and there a tear-stained face as some mother or father or wife prayed for a loved one in the battle area.
“The majority of churches remained open throughout the day for those who wanted to pause a moment during their work to say a prayer for the safety of our men our allies.
“One of the most touching sights of the morning was the young sailor who was waiting at one of the churches when the doors were opened. Tears rolled down his face throughout the brief prayer service for he was home on leave and his ship and his buddies were in the midst of the battle … without him.
Outside the Methodist Church he explained his misery: “”My ship is over there right in the middle of things and I have to be here at a time like this, it’s heart breaking.”
“Howard Blum tuned in on an English commentator via shortwave as soon as he heard the alarm. Mrs. Frank Ozment, Jr., with her mother, Mrs. P.W. Hendrix, stayed by the radio from 2:30 to 6 a.m. Mrs. Ozment’s husband, Captain Ozment, is stationed in the U.S. Army Air Corps in England.
“Leta Mae Kimbrew, receptionist at the Vernon Hospital, woke when the first whistle blew. Her first move was to turn on the radio, and she spent the next hour walking the floor and listening to the news.
“The first Frank Wendt, county farm agent, knew of the invasion was when he saw the lights at the First Baptist Church while taking Mrs. Wendt to the train station.
“The beauty of the Stars and Stripes struck Mrs. E.A. Vernon anew as she walked to work Tuesday morning, after hearing invasion reports. She said she was walking along, worrying about the many boys she knows stationed in England, when she looked up and saw the flag rippling in the early morning breeze.
“’It struck me very forcibly then that flag waving on high is really the most important thing after all,” she said.
“Cadets at Victory Field were first informed of the invasion by Maj. L.C. Schubert, commanding officer of the field at reveille.” 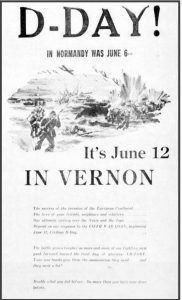 A 1944 ad in the Vernon Record announces a War Bond drive in Vernon in recognition of the D-Day invasion on June 6, 1944.