Daniel Walker
Vernon Record
The Vernon College board of trustees took the first step in seeking property tax support from Wichita County property owners. The trustees voted Monday to send an application to the Texas Higher Education Coordinating Board for approval to pursue a branch campus designation and a branch campus maintenance tax in Wichita County.
College President, Dr. Dusty Johnston, told the board that there had been a lot of discussion over the previous 10 years on gaining tax support for the college from Wichita County since the majority of programs and students are now served from that location. Johnston said currently the Wichita campus is supported by tuition and state aid from contact hours. But he did not believe the college could raise tuition any more.
“I’ve been asked to do some additional programs. I’ve made it very plain we can’t do more without additional support,” Johnston said.
Johnston said the first step in the process is to submit an application and they have to approve it.
“In a public meeting they will either approve it or deny it. I can’t think of any reason for them not to approve it,” he said.
He said he anticipated a decision in October and if approved, that would give the college the opportunity to seek a branch tax in Wichita County.
“The we’ll go to the Wichita County Commissioners Court. They have authority to put it on the ballot,” he said, adding they didn’t have to support it, just approve putting it on the ballot.
He said if the commissioners approve the ballot placement, then it would probably be up for election next May and would need a simple majority to go into effect.
“Why now? They want additional programs,” he said.
“I think it’s a big step for Vernon College,” said trustee Irl Holt in making a motion to proceed. The motion was approved on a second from Bob Ferguson.
Enrollment figures
The Summer II enrollment for Vernon College was presented to the board, and the numbers were down from last year on the Vernon campus and up in Wichita Falls. There were just 14 students enrolled on the Vernon campus, with 332 enrolled at either Century City in Wichita Falls or online.
President Johnston said he was optimistic for the fall and enrollment was looking good so far.
“Our goal is to be stable (on enrollment),” he said.
Budget discussion
Dr. Johnston presented a draft of the college budget for the next year. The budget was presented off of taking the effective tax rate. Johnston said the budget includes percentage raises for all employees and the addition of “a couple of positions.”
The total budget present in this draft was $21.3 million. Johnston said it was a million less than last year, due to turning the bookstore operations overs to a vendor. He said without that change it would be a couple hundred thousand dollar increase in expenditures due to raises, cybersecurity insurance and other factors.
Johnston said the wind farm construction going on this year won’t be on the current tax roll but “we will be anxiously watching it next year” to see how it affects tax revenue.
In the current budget report, vice president Garry David said the finances were right on target for the most part. He said they may finish the year a little under budget on revenue, but that expenditures were also going to be under budget “so we will be fine.”
Trustee Holt asked about the vendor, scheduled to take over book store operations later this month. He asked if they bought the inventory, David said yes, except for some new text books that were sent back to the publisher for a credit. He said the switch over is expected on July 22.
Trustee Norman Brints asked if the new vendors hired any of the college employees. David said 2 were hired, while the rest retired or quit to go back to school. The financial report was approved on a motion from Holt.
The board approved a number of contracts for classes with various school districts, which Johnston called routine.
The board held a retreat that board chairman, Dr. Todd Smith, called “very productive.” 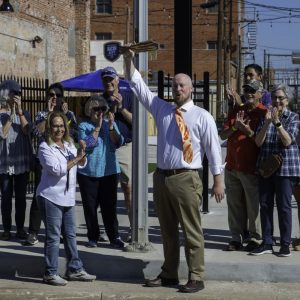