Walter Emilio Orellana, 24 of Wichita Falls, was sentenced to 40 years in prison on Thursday for shooting a Vernon Police officer with a sawed off shotgun last year. The sentence was handed out in the 46th District Court after a trial before a jury of eight women and four men at the Wilbarger County Courthouse.

District Attorney Staley Heatly said that this is the first known case in the world where an officer-involved shooting was captured by a gun camera.

Taking center stage during the trial was dramatic video, played for the jury, from three different cameras,  which captured the two-minute long incident in which Officer Session confronted Orellana on April 27, 2019.  Officer Session was shot in the shoulder by a 20-gauge shotgun blast during the incident. Session received 41 pellet wounds to his shoulder. Thirty-six pellets are still in his shoulder.

Session and another officer combined to shot Orellana  eight times.

The jury was selected on Tuesday and testimony in the trial began on Wednesday.

Testimony from witnesses stated that Officer Session had responded to a dog-bite complaint in the 1600 block of Mansard. As he wrapped up the case, he noticed a silver Ford Explorer parked at a residence at 1504 Mansard and thought someone with a warrant might be hiding inside. Session testified that he was aware that Orellana had an outstanding warrant for his arrest from Wichita County for the felony offense of Continuous Sexual Abuse of a Young Child.

Session instructed fellow officer Brandi Putney Sosa  to drive by as she left the scene.

Sosa was the first witness called by the prosecution. She testified that as she was clearing the dog bite scene, Session radioed her and asked that she drive by the residence in which a silver SUV was parked.

Sosa said Session said he thought it might belong to someone they were looking for to serve a warrant.

“I observed someone leaning over the center console attempting to hide himself,” Sosa testified, she then made the block and drove up behind Session’s patrol vehicle.

“I saw TJ (Session) open the door (of the SUV) to make contact. He put the vehicle in reverse. TJ had to jump off,” Sosa testified.

The defense team objected when Whitsitt asked what she thought would happen if he hadn’t jumped. Judge Dan Mike Bird overruled the objection.

“I believe he would have been struck ( when the SUV backed into Session’s patrol vehicle),” Sosa said.

“After the collision, what happened?” Whitsitt asked.

“I heard a shot and TJ fell,” Sosa replied.

“What did you think?” Whitsitt asked.

“I believed he was dead,” Sosa replied with tears in her eyes.

“What was he doing?” Whitsitt asked.

“He was shooting,” Sosa said.

Sosa said she was behind her vehicle and began shooting at Orellana.

“I was afraid he was going to run over TJ or shot him,” Sosa answered.

Sosa continued that Orellana finally showed his hands and the officers took him into custody. She took the sawed off shot gun from off the passenger seat of the SUV.

“There was glitter on it. There was ‘Walter’ written in glitter. The same glitter was on his fingernails,” she said.

After securing the gun in the trunk of her car, Whitsitt asked what happened next.

“I cleaned TJ’s wound on his left shoulder.

The defense then cross-examined. Attorney Michael Valverde asked why Sosa was suspicious of the SUV and someone in it.

“I was told he possibly had a warrant, 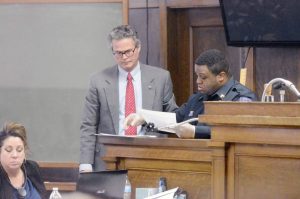 Overall, Orellana was shot eight times. He was later transferred to John Peter Smith Hospital in Fort Worth for surgery and made a full recover. At the hospital, Orellana was interviewed at the hospital by Texas Ranger Jake Weaver who investigated the shooting. Weaver said he went to the hospital 4 or 5 days after the incident. Orellana told Weaver that he was aware of the arrest warrant but that the officer had “disrespected” him by coming into his yard and attempting to arrest him.

Heatly played the interview for the jury.

“He opened the door to take me out. He was pulling” Orellana said.”He pulled the gun out. Why you pull the gun out, he’s going to shoot me.”

Orellana said he knew he had a warrant and then attempted to kick Session.

“You knew you had a warrant, that’s what started this” Weaver asked.

“Why you go to my property and drag me out of my things? You going to let him do that to you?” Orellana asks Weaver.

“He can do that,” Weaver responds.

Heatly then asked Weaver: “Did he tell you he was disrespected by that?”

Valverde then questioned Weaver. He asked how many times Orellana was hit. He was hit with 8 of the 29 bullets the officers fired Weaver said.

“Was he cooperative?” Valverde asked. 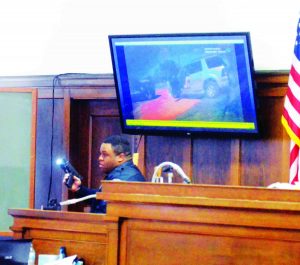 Vernon Police Officer TJ Session displays his service revolver and gun-mounted camera during a trial in 46th District Court while video captured by the camera plays on the screen behind him for a jury.
Daniel Walker/Vernon Record

As Sessions described what was happening, District Attorney Staley Heatly played video from officer Sessions car dash camera, then from his body camera, and finally from a pistol-mounted camera.

Sessions wiped away tears from his eyes as the body camera video played.

Officer Session received 41 pellet wounds to his shoulder from the shotgun blast. Thirty-six pellets are still in his shoulder.

Body worn camera footage admitted at trial showed Session approach the vehicle occupied by Orellana and knock on the window. Orellana then gave the officer a fictitious name. Session then opened the door and ordered Orellana out of the car. At that time, Orellana placed the SUV in reverse and started to back up quickly in the direction of Session’s patrol vehicle. Session was trapped in between the door of the SUV and the SUV itself and had to jump onto the running board in order to avoid being run over or smashed against his own patrol vehicle. At the same time, Session pulled his firearm as Orellana reached for a 20-gauge sawed-off shotgun that he had next to him in the SUV. Session was able to dismount from the vehicle and fire at Orellana who returned fire with the shotgun striking Session in the left shoulder and causing him to fall backward to the ground. Session regained his footing and fired at Orellana as he ran around the back of his SUV. At the same time, Officer Brandi Sosa, who had arrived as backup, fired at Orellana striking him in the abdomen. The jury reached a guilty verdict after less than thirty minutes of deliberation on Thursday morning.

According to District Attorney Staley Heatly, the incident was captured by body worn camera, gun camera, and police in-car video. “There was absolutely no doubt about what happened in this incident thanks to the technology used by the Vernon Police Department,” stated Heatly. “It allowed the jurors to see things from the officer’s point of view as the events unfolded.”

The Vernon Police Department has been an early adopter of technologies having incorporated the use of body-worn cameras in 2012 and gun cameras in 2019. The gun mounted cameras have a small camera just below the barrel of the officer’s duty weapon. When the officer draws the pistol from their holster, the camera is automatically engaged and it doesn’t turn off until the weapon is placed back inside the holster.

“The gun mounted camera captures everything in front of it, whereas a chest-mounted body camera can be blocked by the officer’s hands when she raises her arms to discharge her weapon,” stated Heatly. 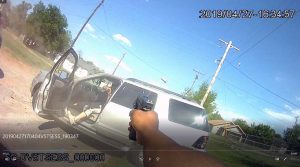 Orellana will have to serve at least twenty-years of the sentence before he is eligible for parole. He was represented by Chuck Smith and Michael Valverde of Wichita Falls. District Attorney Staley Heatly and ADA Jon Whitsitt represented the State. District Judge Dan Mike Bird presided over the trial and assessed the jury’s sentence.