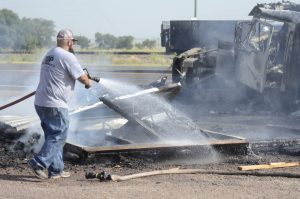 Chillicothe firefighter Troy Perkins works to put out flames on what was the roof of a fireworks stand that exploded on Friday when it was struck by a semi hauling a trailer full of cattle.
Daniel Walker/Vernon Record

First responders and private citizens were pressed into action following an accident which  set off an explosion rocking the south part of Chillicothe during the Fourth of July holiday weekend.

Texas Department of Public Safety troopers stated a semi, hauling a trailer full of cattle, was northbound on U.S. 287.

The 18-wheeler drifted across the southbound lanes and into the southbound median. The semi hit a SUV that was stopped at the stop sign . The SUV was spun around and connected with a utility pole.