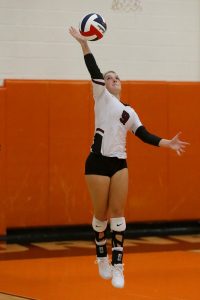 Vernon’s Taylor Reeves serves in the game against Burkburnett. Reeves, a senior, filled up the stat sheet with 33 assists, 4 digs, 2 blocks, 3 kills and 3 aces.

The Lady Lions were led by Taylor Reeves who filled up the stat sheet with 33 assists, 4 digs, 2 blocks, 3 kills and 3 aces. Shay Williams dominated the front line, she had 16 kills and three blocks. Macy Flowers was all over the court with 4 digs, 4 kills, and a block.

Lindy Ochoa added two blocks and 3 kills. Valarie Tyra had 5 kills and a dig. Brooke Myers had twp aces, 3 kills and 3 digs. Addison Spencer had an ace and an assist.