The Vernon football Lions have had a tough go in the first part of the 2020 season, finishing non-district with an 0-6 record. There have been some close calls, and a few what ifs, but non of that matters now.

The Lions open district play this Friday at 7 p.m., hosting Mineral Wells (1-4, 0-1). Vernon is coming off of a bye last week, as the other four teams in the five team district faced off. Mineral Wells lost at home  42-14 to Iowa Park. Graham beat Bridgeport 63-7.

The Rams have had one of the stranger seasons among the district teams. Mineral Wells started the season 0-2 after going winless in 2019. They won a home game on Sept. 11 45-22 over Venus, before having games against Sanger and Gainesville cancelled due to a covid-19 outbreak. They lost to Glen Rose 62-17 on Oct. 2, while missing five starters for the illness. The Rams have their full roster participating in practices for the first time last week going into the game with the top-10 ranked Hawks. It didn’t matter. Iowa Park jumped out to a 21-0 lead.

The Rams showed grit when receiver Landon Russell took a long pass for a score in the second quarter, and then running back Anthony Hernandez ran one in to make it 14-21 with eight minutes left in the first half.

Mineral Wells’ defense forced Iowa Park into a third down situation on its next possession, and Cambren Morrison intercepted a pass, giving Mineral Wells a first down in good field position with a chance to tie the game. But the offense stalled, however, and punted on fourth and two, and the Hawks scored a touchdown three plays later.

The Rams couldn’t recover, and the Hawks scored two more TDs before the half ended for a 42-14 lead and then cruised to the victory and a scoreless second half.

Its no secret that the Vernon Lions offense has struggled this season, while the defense has been stout. If the Lions are going to get on track this is the week to do it. They have had a bye week to iron out miscommunication issues and are facing the worst defense they are likely to encounter this season. Mineral Wells is giving up 55 points a game and scoring 22 a game.

It may be the first district game, but the stakes are high. The loser of the game will have a hard time making the playoffs. 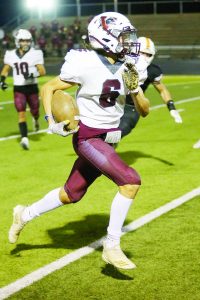 Vernon’s Jordan Garcia races for the endzone in the non-district game with Burkburnett earlier this season.

Northside Indians (3-2) will be back in action this week after a Covid cancelled game two weeks ago, and then a scheduled bye last week. Northside is also opening district play, hosting Spur (1-4, 0-1). The game will serve as Homecoming for the Indians, after Homecoming was cancelled to weeks ago. Spur lost its district opener 90-40 last week to Crowell. The two teams have no common opponents. Spur is favored to 45 the Indians according to sixmanfootball.com

Speaking of the Crowell Wildcats (2-2, 1-0), they are ranked No. 13 this week and  will host No. 9 Knox City (3-2, 1-1) on Friday in a game of 1-0 teams in District. Knox City beat Paducah 52-6 last week. The winner of the game will likely claim one of the five-team district’s two playoff berths. Knox City is a 21-point favorite according to sixmanfootball.com

Chillicothe is playing out of district this week at Hart, and is listed as a 10-point underdog.