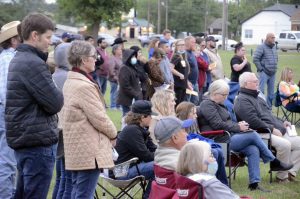 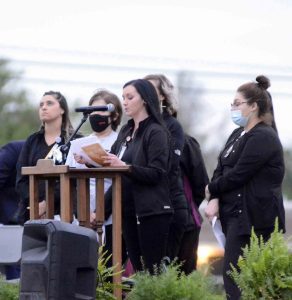 A large group gathered on the track area at Wilbarger General Hospital to recognize and remember friends and family who had died of Covid-19 during a “Vernon Remembers” event held at sunset Monday evening.

The event, hosted by the hospital, opened with the welcome by hospital CEO Tom Siemers. Pastor Early Williams gave the opening prayer and words, followed by singing of “Oceans” by Crystal Wells.

WGH employee commemoration was given by Laci Danner, RN, BSN, who told of the staff’s experience with the patients as they battled Covid. Each nurse was also recognized. Also recognized were other staff members, fire department, police and first responders.

Names of the patients were read by the nurses followed by a moment of silence and concluded with Wells singing “Go Rest High on That Mountain.”

The Vernon Strong flag dedication was made  by Vernon Mayor Pam Gosline.

Closing the event with words of hope and a prayer was Pastor Anthony Inman.

A circle of luminaries was lit by glow sticks on the hospital’s front lawn.