Richard Vernon Fox, 38, of Helena, Montana, was sentenced to five years in two separate cases following his plea of guilty to robbery and evading arrest with a motor vehicle.

On May 5, 2021, Vernon police were dispatched to Family Pharmacy in reference to a male subject who had passed a note through the drive through window asking for narcotics and cash. In the note, Fox claimed to have a bomb in his vehicle. An employee called police and Fox drove away as law enforcement began arriving at the scene.

Officers pursued Fox up and down on U.S. Hwy 287, through Vernon, and then south down U.S. Hwy 183 when Sheriff Brian Fritze performed a PIT maneuver on Fox’s vehicle which ended the chase.

Fox was represented by Michael Valverde of Wichita Falls. 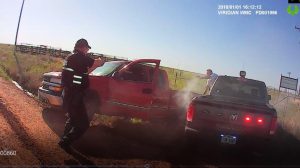 The case was prosecuted by the 46th Judicial District Attorney’s Office while District Judge Dan Mike Bird presided over the hearing and assessed the sentence.