Tyson Foods celebrated the 100th anniversary of Wright Brand bacon Friday here in Vernon. For a day Vernon became “Bacon City.”
Since a city with a new name needs a new mayor, Tyson Foods held a nation-wide competition for that position. Entrants were encouraged to submit a one-minute video of themselves explaining why they should be mayor and relating their love for Wright Brand bacon. From applicants all over the U.S., IT executive and web developer Walter Arnett from Lexington, Kentucky, was chosen to be the mayor of Bacon City for the day.
In an interview with his honor, the Bacon City, U.S.A. mayor following his inauguration in front of the new Wright Pavilion here in Bacon City, Mayor Arnett explained why he entered the contest to begin with.
Mayor Arnett smiled and adjusted his bacon necktie and said, “I just love Wright’s bacon, always have.” Asked if he had a favorite flavor, he replied, “Asking what my favorite flavor is like asking someone what their favorite child is, but the answer would have to be hickory. Or is it applewood? Maybe they have a secret flavor only for mayors? I like them all!”
When asked what he intended to do as Bacon City, U.S.A. mayor, Arnett smiled again and replied like all politicians, “My plans included shaking hands, kissing babies and eating bacon.”
Arnett presided over a fun-filled day celebrating Wright Brand bacon. Festivities included multiple vendors, musicians and a variety of food featuring, of course, bacon.
On Saturday, Wright Brand employees enjoyed a picnic at the Santa Rosa Rodeo Grounds. 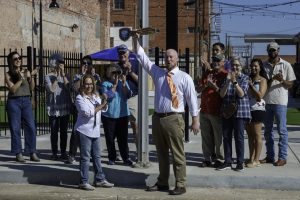