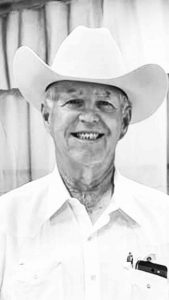 burnett, Tx.
A memorial was held on Saturday, Nov. 19, 2022
at the First Baptist Church in Crowell, Tx.
Otis was born Sept. 30, 1946 in Mt. Vernon, Tx.
He was the son of Jimmie D. and Rose Johnson and
raised by O’Neal and Jessie Wheeler Johnson in
Thalia. He was a graduate of Crowell High School.
Some of his fondest memories were playing football
there. After he graduated, he worked for Sullivan
Funeral Home, for the police department, and also as
a hay farmer and baler. When he lived briefly in Las
Vegas, he worked for the 4 Queens as a security
guard. He retired from North Texas State Hospital
after 13 years as a security worker. He loved cigars,
dancing, and going to the casinos.
Otis is survived by three siblings — Cheryle
Johnson Burke of Thalia and husband
Bobby, Jimmie Dayton of California, and Michael Johnson of Vernon. He has
five children — daughter Lisa Johnson of Throckmorton along with
granddaughter Preslea Thompson, husband Travis and great-grandson Kaiser of
Lubbock; daughter Michelle Johnson of Vernon along with grandchildren
Baylea Henry, husband Travis, and great-grandson Bowen of Moore, Okla., and
Cheyenne Pitts of Vernon; daughter Amanda Johnson of Vernon; son Cody
Echols and wife Alisa, along with grandsons Braxton and Brantley of
Windthorst; son Jerrod Johnson and fiancé Bailey Degan of Thalia along with
grandchildren Aria Johnson of Katy, Lakyn and Taylen of Vernon, and Elayna
Chatfield and Oaklee Johnson of Thalia, and stepson Michael Gibson. Family
friend Mike Herchman of Vernon was also very helpful to him throughout the
past several years of his life.
He is preceded in death by O’Neal and Jessie Johnson, parents Jimmie and
Rose Johnson, step-mother Joline Johnson, and brother Glyndon Johnson.
Memorials can be made directly to the Thalia Cemetery.