Lelia Ann Frank Fisher went to be with her heavenly
father on Nov. 21 in Vernon, Texas. She was born to
William Frederick Frank and Anna Louise Frank Ellis on
Nov. 4 1943. She was raised by her grandparents James
and Alice Shepard after h 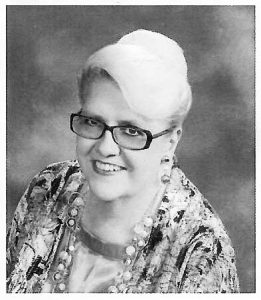 er father was killed in World
War II.
She graduated from Vernon High School in1962. She
married Lester Fisher on June 8. 1964. She received
her teaching certi􀂿 cate in History in 1966 from Hardin
Simmons University in Abilene. She taught World History
in Odessa for 2 years before moving to Galveston where
she taught World History from 1975 to 2003 at Ball High
School. She was very much loved by the faculty and
her students. She retired from teaching in 2003 and moved to Vernon. She was
a member of First Baptist Church and the Joy Byrd Sunday School class where
she was a substitute teacher. She was a member of the Vernon Regional Retired
Teachers Association.
She is survived by her half-sister Sherry Rodgers of Wyoming and Pat Ellis of
Dallas, several cousins and special friends Paul and Teresa Weatherly of Vernon
and Mark and Augie Jenner of La Marque, Texas. She was preceded in death by
her husband Les, her grandparents, parents and a half sister GeorgeAnn Ellis.
Memorials may be made to First Baptist Church.
Services were on Monday, Nov. 28, 2022 at 2 p.m. at First Baptist Church with
Mike Klappenbach and Brooks Kimmey o􀵶 ciating. Burial followed at Wilbarger
Memorial Park under the direction of Sullivan Funeral Home.