The Vernon Lady Lions hosted Iowa Park on Tuesday night with first place in the district on the line.
The two teams traded sets with Iowa Park winning in five sets 25-17, 22-25, 19-25, 25-20, 14-16.
The Lady Lions took a 14-13 game point advantage in the fifth set, and appeared to win when a Iowa Park return landed squarely on the out line. The referee called it in, to the groans of the home crowd. Vernon lost the momentum as Iowa Park reeled off the final three points.
The Lady Lions showed a lot of heart, to even force a fifth set, falling behind 15-8 in the fourth set.
A well-called timeout righted the ship as Vernon went on a 9-1 to take a 17-16 lead. The teams traded points before Vernon stormed to the finish for a 25-20 win.
Vernon was led by Cameron Garza with 17 kills and 11 digs. Carli White had 11 digs and six kills. Taylor Reeves had 49 assists, 13 digs, and 4 kills. Shay Williams had 8 digs, 10 kills. Reianna Dixon had 7 digs. Neveah Guerra had five digs.
The Lady Lions will be at Graham on Friday to face a state-ranked Lady Blues squad. 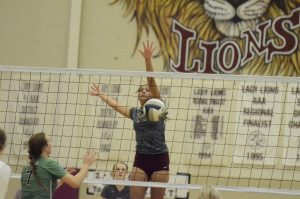