Services will be Monday, Oct. 22, 2018 at 2 p.m.at First Baptist Church with Keith Street  and Russ Street officiating. Interment will be held at Eastview Cemetery under the direction of Sullivan Funeral Home.

R.O. was born Thursday, Nov. 6, 1919 in Caddo, Okla. He was the son of the late Robert L.  Street and the late Delia Cooper Street. He married Gwendolyn Stevens 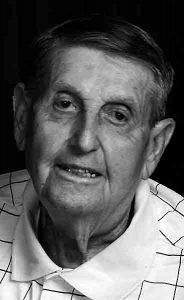 on Sept. 6, 1941 in Fredrick, Okla.. She preceded him in death on June 25, 2004. He served in WWII, CPI, Army-Air Force Flight Engineer from 1943-1945 and was a base foreman.  He worked as a finish blade man in road construction. He was a member of First Baptist Church and James Sunday School Class.

He was preceded in death by a daughter Twila Barnes on July 9, 2009.

Memorials can be made to Wounded Warriors Disabled Veterans Association.