Vernon was the center of a regional celebration when the report of an Armistice to end the Great War was announced on November 11, 1918.
The newspaper reported that citizens from all parts of the county, and as far away as Crowell and Chillicothe descended on Vernon for a celebration.
Fearing accidental injury from falling bullets discharged into the air, the city banned gunfire, instead buying barrels of gun powder and commandeering 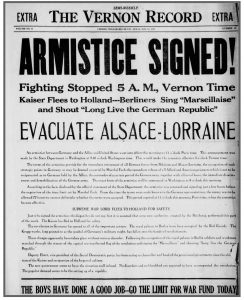 anvils from blacksmith shops. The anvils were set up around the courthouse square, gun powder poured on them and residents banged on them with hammers — shaking nearby buildings.