Vernon’s robotics team, the VR Fitness Crew, had a strong showing at the First Lego League Championship Robotics Tournament held in Dallas on Saturday, Feb. 9.
The North Texas region had over 450 teams participate in First Lego League this season. From these 450 teams, only 60 teams earned a spot through qualifying tournaments to compete in the Championship Tournament.
The Championship Tournament was an all-day event that took place at Parrish Episcopal School in Dallas. Teams competed in a robot game, where they received a score on how many missions their robot was able to complete in a set time period. The teams were also scored on three judged presentations, one on robot design, one on core values and one on a solution to a real world problem.
This year’s theme for the Tournament was Into Orbit, and the teams had to identify a problem related to long-distance space travel and create a solution to this problem.
Vernon’s project identified the problem of isolation and confinement encountered by astronauts during long-distance space travel and created a solution involving the use of virtual reality goggles.
Out of the 60 teams at the Tournament, Vernon placed 20th in the robot game and was in the top six teams for their project presentation. That means that out of the 450 teams competing in the North Texas Region, The VR Fitness Crew had one of the 20 best robot performances and one of the top 6 best project presentations. This strong result follows an excellent showing last year when the Boys & Girls Club team made an appearance at the Champions round in its first ever season.
“I’m very proud of how hard the kids worked preparing for the tournament. It is quite an honor to be considered a top team for their project, and I’m excited to see what next season bring,” stated coach Meg Heatly.
The VR Fitness Crew consists of Ellie Belew, Jacob Brown, Ollie Heatly, Douglas Jeffrey, James Jeffrey, Cooper Schiwart and Stryker Slaydon. It is sponsored by the Boys & Girls Club of Vernon. 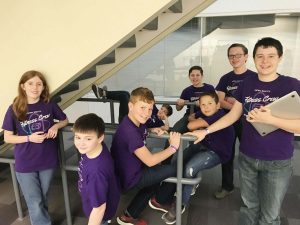