Charles Edwin Donges, 89, of Vernon, Texas died on Tuesday, Feb. 19, 2019 in Vernon.
Services were held Friday, Feb. 22, 2019 at 2 p.m. at Sullivan Funeral Home Chapel.  Officiating was Rev. Gib Baskerville. Interment was held at Wilbarger Memorial Park under the direction of Sullivan Funeral Home.
Charles was born April 10, 1930 in Elliott, TX to the late Charles George Donges and the late Elsie Raines Lemon.  He married Alpha Jean May on July 14, 1951 in Elliott, TX.  Jean preceded him in death August 11, 2002.  He later married Patsy Jouett Schur on March 18, 2006 in Vernon, TX.
Charles served in the U.S. Air Force as a Technical Sergeant from 1948 through 1953.  He then worked for the U.S. Postal Service, retiring with more than 34 years of federal service.
Charles was a caring husband, father, and grandfather who was dedicated to family his whole life.  He was considerate and constantly worked to ensure that everyone around him was cared for.  He always cheerfully jumped at the opportunity to help with home improvement projects or whatever else was needed by his children and neighbors and friends.  His greatest satisfaction in life came from helping others.
Charles w 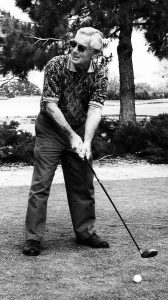 as dedicated to his church and community service.  He was an active member of First Baptist Church in Vernon for more than 65 years.  The fellowship of his Sunday School class was one of the highlights of his week.  He delivered Meals on Wheels for many years and donated blood regularly for decades.  Charles was a willing volunteer for many other community services and projects throughout his life.
Charles was an avid golfer.  He loved the game for its challenge and appreciated it for its health benefits.  He would only ride in a cart if he had no choice, which means he walked thousands of miles playing golf for more than 50 years.  There were few people whose physical condition matched Charles’ at any age.  We hope he has a nice 18 hole course to walk in Heaven!
Charles is survived by wife Patsy Donges of Vernon; son Randy Donges and wife Ruth of Dalhart, TX; daughter Teri Donges Aslin and husband Randy of Kingsland, TX; sister Jo Ann Donges Hudgins of Horseshoe Bay, TX; granddaughter Rachel Ann Donges; granddaughter Laura Jean Donges LaSala and husband Allen; and great grandson Ty LaSala.  Charles is preceded in death by two brothers, Loyd and Curtis Donges.

Visitation was from 1 p.m. until service time on Friday at Sullivan Funeral Home.

Memorials can be made to House of Hope or favorite charity.