Three Vernon Lion wrestling team members who advanced to state competition on Feb. 23 in Cypress looked back on a successful season on the mat, which culminated in two of them placing after reaching their final rounds.
Senior Truman Castleberry (18-3) placed third in the 195-pound class and scored 20.0 team points. His high school wrestling career concluded with during a third-place match by decision over Kallon Guyton (44-6) of Leander Glenn (Dec 2-1).
Senior Marc Rodriguez (14-5) placed fourth in the 285-pound class and scored 17.0 team points after losing the third-place match in his weight by decision to Ben Bell (40_30 of Cedar Park (Dec 5-3).
Junior Darren Carpenter (21-7) competed in the 152-pound weight class but did not place though he was among the top eight in his class. He wrapped the season with a loss in third consolation round by decision to Moses Torres (38-14) of Canyon Randall (Dec 10-5).
Castleberry, the son of Jennifer and Shane Castleberry, began wrestling in the seventh grade which started a six-year run. He advanced to state competition for three consecutive years starting with his sophomore year during which he did not place but was among the top eight in his class and then placed fourth at state last year as a junior before advancing to third at state to close out his career last weekend.
“It’s fun to wrestle at such a competitive level and challenge some good wrestlers on the mat.”
Castleberry provided an interesting answer about his decision to go into wrestling in middle school.
“I wasn’t very good at basketball,” he said. “But wrestling interested me. I though it would be fun, but tough and exciting.”
In addition to wrestling, Castleberry also played football and ran in track during his high school year.
He plans to attend West Texas A&M University after graduating from VHS but said he has no plans to participate in sports.
Rodriguez, son of Jennifer and Roland Rodriguez, began wrestling during his sophomore year in high school and competed at the state level all three years.
“It’s loads of fun to compete on the mat,” be with your friends and represent your school,” he said.
During his sophomore year, he was knocked out of competition at state on the first round and then placed sixth in his junior year and fourth last weekend. He also provided an interesting answer about why he decided to pursue the sport in high school.
“In order to get Truman (Castleberry) off my back,” Rodriguez said. “He’s been wanting me to get into wrestling since the seventh grade.”
In addition to wrestling, Rodriguez participated in several other sports at VHS including football, baseball, basketball, powerlifting and track.
Rodriguez also plans to attend WTA&M this fall, where he will play football for the Buffalos.
Carpenter, son of Nikki and Raymond Carpenter, will have one more year to compete on the mat for the Lions and said he intends to return next year. He wrestled much longer than his state-bound teammates, having been on the mat since age 4 or about 14-15 years of experience.
“It’s fun to win,” he said. “And it was pretty exciting to go to state.”
In addition to advancing to state this year, Carpenter advanced to regionals during the previous three years. In addition to wrestling, Carpenter also participated in track at VHS. 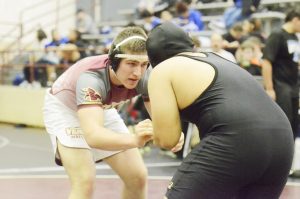 Vernon’s Truman Castleberry made quick work of his opponent on Friday night at the Red River Classic.
Daniel Walker/Vernon Record