Dr. Travis Albert White MD passed away on April 2, 2019.  A time of fellowship and remembrance was scheduled from 6 to 8 p.m. on Friday, April 5, 2019, at Lake Ridge Chapel and Memorial Designers.  Family and friends gathered to celebrate his life of 84 years at 10 a.m. on Saturday, April 6, 2019, at Lake Ridge Chapel.  Family and friends were invited to share memories and expressions of sympathy and view Dr. White’s life tribute at www.memorialdesigners.net

Dr. Travis Albert White was born on Nov. 3, 1934, to Travis and Evalyn Van Keuren White in Dallas, Texas. Travis married Johnnie Ruth McCann on Dec. 23, 1958, in West Columbia, Texas and was happily married to her for 60 years.  He proudly served in the U.S. Army Reserves and was a Lieutenant at the time of his honorable discharge.  Dr. White was a radiologist and served in the medical field for over 40 years.  He was a member of the Texas Medical Association as well as Trinity Church of Lubbock.  After short stints in El Paso and Birmingham, Alabama, Travis and Johnnie Ruth settled in Vernon, Texas in 1967 for many years.  Later, they spent several years working across the country while homeschooling their youngest son, Peter.  Travis placed God first, followed by family and country.  If he was not working, he was doing something for the church. He was a Sunday School teacher and prayer group leader both at home and church.  He had a heart for others; when working at hospitals, he would visit with and pray for patients that were not his own.  Travis and Johnnie Ruth settled in Lubbock in 1994 and Travis was an active member of Trinity Church and the Trinity Church Prime Timers.

He was preceded in death by his spouse, Johnnie Ruth White, parents, Travis Alden and Evalyn May White; and brother Nelson Frank White.

The family of Dr. Travis A. White would appreciate contributions to be given to Trinity Church and Concerned Women for America. 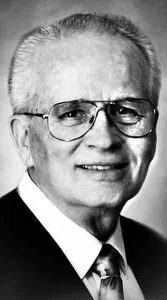