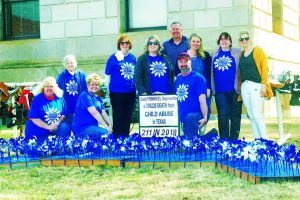 As the spring breeze blows through the trees on the west lawn of Wilbarger County Courthouse, 211 blue pinwheels turn in the wind. Behind them 203 pairs of shoes hang from a white rack. The pinwheels and shoes symbolize grim facts – 211 child deaths that took place in Texas in 2018 from child abuse and 203 confirmed cases of child abuse in Wilbarger County in 2018.
April is Child Abuse Prevention Month, and the Wilbarger County Child Welfare Board kicked off the month with their annual pinwheel project by staking 211 pinwheels on the courthouse lawn and displaying the 203 pairs of shoes.
Child abuse deaths in Texas is up from 172 reported in 2017. No child deaths from abuse were reported in Wilbarger County in 2018, however the confirmed cases of child abuse in the county is up from 42 last year.
As part of the month’s awareness, coloring sheets were dispersed to area schools for inclusion in a contest to help raise awareness among the county children. Winners of this contest will receive gift cards as prizes.
This month and throughout the year, Wilbarger County Child Welfare Board is encouraging all individuals and organizations to play a role in making Wilbarger County a better place for children and families. By ensuring that parents have the knowledge, skills, and resources they need to care for their children, residents can help prevent child abuse and neglect by making meaningful connections with children, youth and families in the communities.
Research shows that protective factors are present in healthy families. Promoting these factors is among the most effective ways to reduce the risk of child abuse and neglect. They are:
–Nurturing and attachment
–Knowledge of parenting and of child and youth development
–Parental resilience
–Social connections
–Concrete supports for parents
–Social and emotional competence of children
“April is a time to celebrate the important role that communities play in protecting children and strengthening families,” Jennifer Young, president of the Child Welfare Board, said..
“Everyone’s participation is critical. Focusing on ways to connect with families is the best thing our community can do to strengthen families and prevent child abuse and neglect.”
The Wilbarger County Child Welfare Board is a nonprofit organization led by a board of directors. The mission of the board is to work to help meet the needs of abused and neglected children in our county and to assist foster parents and Child Protective Services in aiding the children under their care. Members of the board are appointed from the County Judge, Greg Tyra. Members include, Jennifer Young, Jerry Lou Schmoker, Adrienne Beazley, Tisha Moore, Darell Kennon, Amanda Harris, Sandra Whitt, Sarah Hernandez, Kim Jones, Angela Morrison, Marlene Moore, and Darren Harvick
Anyone who would like to support the efforts of the board, can contribute to the Wilbarger County Seeds of Hope campaign. Also, pursuant to Texas Government Code 61.003, there is also the option of donating all or a fraction of juror reimbursement to a charitable program. The Wilbarger County Child Welfare Board is an eligible charitable organization.