Editor’s Note: On the 40th anniversary of Terrible Tuesday, April 10, 1979 The Vernon Daily Record remembers those events with a timeline created from the VDR archives. — Daniel Walker

Tuesday, April 10, 1979 dawned bright and clear, a change from the thundershowers that threatened the area for the past few days. More than 200 residents were attending a Chamber of Commerce-sponsored breakfast at Wilbarger Auditorium, and then headed off to their jobs.

As the day progressed, small clouds began to gather and the humidity began to increase. By 1 p.m., those once-tiny clouds had grown much larger, forming into classic domed-shaped that experienced weather watchers had come to dread.

About an hour later, the National Weather Service had issued a tornado watch for the area. City officials got the first warning of a tornado that had developed. As usual, the word was passed on to hospitals and nursing homes. In the absence of a civil defense director – Ed Luttrell, Jr. had resigned from the position three weeks earlier, another weather watcher – Dan Osborne – was also notified.

Around 3 p.m., frantic calls were coming into local local law enforcement officials – tornado on the ground near Rayland, near Five-In-One on the Waggoner Ranch. Pieces of debris, thought to be from a barn, were seen flying past cars on U.S. Highway 70 west of Vernon.

Official records cease at that point, since the scene at City Hall became became for anyone to make more notes. They would not resume until 10:24 p.m., when Justice of the Peace Joe Krebs called with a list of the dead. Individual memories, however, have provided the following timeline of the tragedy.

–3:05 p.m., City Manager Sam Phelps, fresh from a city commission meeting that had been hastily adjourned upstairs, confers with Police Chief Wayne Hendrix in the police station about who had the authority to sound storm warning sirens. Phelps finally tells Hendrix to “do it if you think you need to.”

–3:10 to 3:15 p.m., Hendrix takes his usual civil defense post near Vernon Regional Junior College, but sees only dark skies and black clouds – nothing, he said, that weather watchers had been trained to look for in spotting tornadoes. Officers on South Sand Road, however, report fierce wind filled with debris.

–3:15 p.m., Lockett resident Dennis Lingnau photographs the massive tornado on the ground; a tornado touches down in Crowell, destroying the home of Jim Ervin and damaging several others.

–3:17 p.m., Hendrix, in radio contact with Sheriff Clinton (Rusty) Russell, who was stationed at Kid League Park, makes the decision to sound the sirens, despite worries from both men that another false alarm warning would anger residents.

–3:18 p.m., police dispatcher Patty Kincheloe presses the button to activate warning sirens. By this time, however, many of the sirens had already blown down.

–3:50 p.m., after passing over unpopulated areas to the south and east, the tornado slams into southeast Vernon crossing Wilbarger Street and Expressway 287 on its curved route north.

As quickly as it came, the killer storm was gone. And, like someone who has been injured but doesn’t feel the pain immediately, it would take a few moments for most Vernon residents to realize the destruction that had occurred. Because the huge twister was at an awkward angle as it swept through the icty, it was unrecognizable as a tornado to many who had directly at it 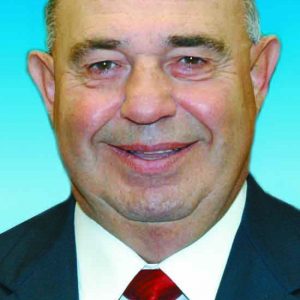