GRAFORD – The Vernon Lady Lions softball team traveled here Wednesday for a bi-district game against the Sweetwater Lady Mustangs, and returned home with a 7-0 victory to advance to the area round. next week against the winner of the best-of-three between Brownwood and Springtown.
The Lady Lions got a big boost from senior Avery Kinney at the plate — she scored Vernon’s first run on a homerun in the fourth inning and added a triple.
It was a scoreless game until the fourth inning, until the Lady opened the got a homerun from Kinney to go up 1-0. The Lady Lions would score four times in the inning, including a 2-RBI double from Williams to score Caitlin Brints and Makyleigh Leija.
Shay Williams dominated in the circle, she pitched a 7 inning shutout with 16 strikeouts for the Lady Lions, allowing just three hits.
Sweetwater threatened in the first inning with runners at second and third on walks, with one out. Williams struck out the next two batters to escape.
Kinney made a leaping catch at the wall in the fifth inning to rob the Mustangs of their other scoring opportunity, as they stranded a runner at third in the inning.
Williams also went three for 4 at the plate with two doubles and two RBIs and scored a run in the sixth. Makyleigh Leija was 2 for 3 with 2 doubles, an RBI and a run scored. Addison Spencer also was 3 for 4 with two RBIs and scored a run in the fifth. Kinney went two for three with a home run and a triple. 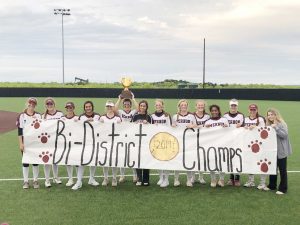