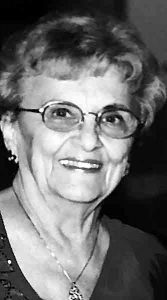 Mary Madeline Guggisberg, 85 of Vernon, Texas died on Tuesday, May 21, 2019, in Wichita Falls, Texas.Services were held on Friday, May 24, 2019 at 1 p.m. at St. Paul Lutheran Church with Rev. Paul Neuberger offi ciating. Interment was at Wilbarger Memorial Park under the direction of Sullivan Funeral Home.Mary was born Monday, Dec. 25, 1933 in Wilbarger County, Texas. She was the daughter of the late Herman T. Schulz and the late Emma Gloyna Schulz. She married Freddie Leon Guggisberg on Oct. 27, 1953 at Zion Lutheran Church in Lockett, Texas. He preceded her in death on Oct. 27, 1989. She had been a resident of Vernon all of her life. She enjoyed bowling, cooking, sewing, restoring furniture and she enjoyed her grandchildren most of all. She was a member of St. Paul Lutheran Church and she was a homemaker. Mary is survived by her daughter, Julie Fancher and husband Danny of Vernon, Texas; four grandchildren Krystal Smith and husband Trey, Jarod Fancher, Jason Fancher, and Justin Fancher and wife Sherry; her great grandchildren Kaydence, Keaton, Kyle and Keith, and sister-in-law Elizabeth Guggisberg of Vernon, Texas. She was preceded in death by her brothers Walter Schulz, Homer Schulz, Robert Schulz, and Herbert Schulz, and one sister, Alice Gfeller.Visitation was held Thursday, May 23, 2019 at Sullivan Funeral Home.Memorials can be made to St. Paul Lutheran Church or favorite charity.Online condolences may be made to the family at www.sullivanfuneralhomevernon.com.