Sergeant First Class Matthew “Kyle” Evans passed away peacefully in his sleep on May 25, 2019 at the age of 33. Kyle’s legacy will be carried on by his one true love of twenty years and wife of five years, Lacey Farrell Evans; daughter, Maryn; and son, to-be-born in August.

Kyle was a loyal husband, loving father, caring son, admired brother, reliable friend, professional soldier, generous neighbor, steadfast patriot, and an American Hero. He was fierce, fearless, captivating, adventurous, animated, passionate, authentic, unrestrained, and dedicated. His presence commanded a room with his endless supply of stories, love, comedic antics, and fresh new dance moves. As a soldier, he saw the worst of war and faced it with unwavering strength and courage. Dressed in his Green Beret by day, he transformed into his daughter’s favorite playmate and real-life superhero by night. No matter where he was or what he was doing, he always made family and friends his priority. He traveled the world, fought our enemies, trained our allies, and saved lives. De Oppresso Liber.

Kyle was born in Childress, Texas, to B.J. and Tammy Evans. He grew up in Texas, and then moved to Wisconsin in 2001 where he graduated high school with honors in 2004. Shortly after graduation, he enlisted in the United States Army. Kyle completed Infantry training in Fort Benning, Georgia, and was stationed in Baumholder, Germany with 2nd Battalion 6th Infantry, 1st Armored Division. In 2005, he deployed to Ramadi, Iraq in support of Operation Iraqi Freedom where he served as a fire team leader and a sniper team leader. In 2007, Kyle was a selectee at the U.S. Army Special Forces Assessment and Selection, and in 2009, he graduated from Special Forces Qualification Course as a Special Forces Weapons Sergeant and was assigned to 1st Battalion, 1st Special Forces Group (Airborne) at Torii Station in Okinawa, Japan.

In lieu of flowers, the family would appreciate donations to the children’s 529 education fund; please make checks payable to Lacey Evans and send to P.O. Box 94254 Lubbock, Texas 79493-4254. 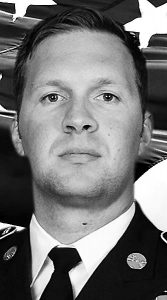