Doris Patricia Lovelace Cowling was born June 22, 1925 on her family’s farm near Vernon, Texas.  Her father was William Bryan Lovelace and her mother was Nellie Ruth McGill Lovelace.  Doris graduated from Kermit High School and earned a Bachelor of Arts degree in Government from Texas Tech University in 1946.  At Texas Tech, she met her future husband, Ben Cowling, then in the Army Air Corps at Reese Air Force Base.  Doris and Ben lived for several years in Lubbock, then moved to Kermit and ultimately relocated to Dallas.

Doris passed away peacefully in Dallas on June 30, 2019.  Doris was predeceased by her parents, her sister Fern Alexander of Big Spring and Ben Cowling of Dallas.

Doris is survived by her son, David Cowling married to Amy Youngquist in Dallas; her daughter Rebecca Cowling in Baltimore; and her grandchildren Kathryn Cowling, Allison Pressly, Margaret Cowling and Blake Pressly.  Doris is also survived by numerous nieces and nephews whom she adored.

Ben and Doris were the Buick, Cadillac and Pontiac dealer in Kermit for many years. Doris was active in the First United Methodist Church where she served in Sunday School education and bereavement meal organization.  She was very active in the Kermit Garden Club and involved in Girl Scouts. Ben and Doris loved dogs and nurtured several rescue dogs.  Upon moving to Dallas, Doris became an active volunteer at St. Michael and All Angels Episcopal Church, the St. Philips School and Community Center, and, with her husband Ben, at Presbyterian Hospital.

In lieu of flowers, the family requests any memorials be donated to St. Philips School and Community Center, 1600 Pennsylvania Ave., Dallas, TX 75215.  www.stphilips1600.org 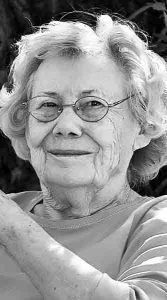