Graveside services will be Monday, Oct. 28, 2019 at 11 a.m. at Childress Cemetery in Childress, Texas under the direction of Sullivan Funeral Home. Officiating will be Rev. Randy Wilson.

Joe was born Monday, Feb. 11, 1924 in Childress, Texas. He was the son of the late Jody Wilson and the late Claudie Toon Wilson. He was married to Mary Helen Morris on April 29, 1944 in Childress. She preceded him in death May 13, 1990. He served in WWII Seabees; He was stationed in Guam. He had lived in Vernon since 1968. He owned and operated a Body Shop, Used Car Lot, and he was a mechanic in Vernon. He retired from Vernon State Hospital South where he was a teacher. He was a member of Calvary Baptist Church.

Online condolences may be made to the family at www.sullivanfuneralhomevernon.com 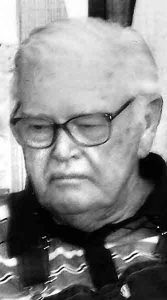