Robert “Rob” Orr died Oct. 16 in Dallas, Texas at age 89,
one week shy of his 90th birthday.
A celebration of life is planned for Friday, Nov. 8 at 10:30
a.m. at Prestoncrest Church of Christ in Dallas. A family
burial service will be at Eastside Cemetery in Vernon, TX,
on a later date.
Rob was born on Oct. 23, 1929 in Vernon, Texas to
Clarice Roberts Orr and William Clyde Orr. He graduated
from Vernon High School in 1948, where he played
basketball, football, track and was a district champion in
the mile run. He spoke fondly of his childhood during the
Dust Bowl years with his brothers Forrest, Graham and
Dub and the challenges and rewards of growing up on a
farm during that period surrounded by the support of his
tight-knit family.
He attended Abilene Christian College on a football
scholarship, where he played on the undefeated 1950
ACC team and made the All-conference team in 1951.
He graduated with a business degree, with a minor in
agriculture, in 1952. In Abilene, he met Patsy Etter. They
wrote letters to each other while Rob served as an U.S.
Naval Offi cer for three years, sailing to Alaska, Hawaii, and other central Pacifi c Islands.
They married on Aug. 13, 1955 and moved to Vernon to assume management of the family
farm.
Rob served in the Vernon school district for 36 years. Starting as a teacher, he went on
to obtain a M.Ed. from East Texas State University, and then became VISD’s Curriculum
Director, and then Assistant Superintendent for Instruction. Throughout his tenure with
VISD, he was the stadium announcer for all Vernon Lions football games and many other
athletic events. He also served as a deacon and song leader at Wilbarger Street Church of
Christ.
In all his roles as a father, grandfather, farmer, and educator, Rob was known for servant
leadership, his quick wit, and his woodworking craftsmanship.
After Patsy’s death in 1999, he married Linda Lee Powell on Sept. 14, 2002. They lived in
Dallas and attended Prestoncrest Church of Christ for 17 years.
He was preceded in death by his parents, William Clyde Orr and Clarice Roberts Orr; Patsy,
his fi rst wife; brothers Boyd Orr, Forrest Orr, Graham Orr, and W.C. “Dub” Orr; and a sister,
Edith Orr.
Among survivors are his two sons, Doug Orr, and his wife, Jayne, of North Richland Hills,
and Jim Orr, and his wife, Elaine of Abilene; seven grandchildren, four great-grandchildren,
numerous nieces and nephews, and his wife, Linda Orr, and her children and their spouses,
Chris and Gretchen Groves, Christina and Mark Lawless, Carter and Mary Groves, Cavan
and Sallie Groves, Candace and Jamie Crofford, and 13 grandchildren-in-law.
In lieu of fl owers, memorial gifts in honor of Rob may be made to the Robert Orr
Endowed Football Scholarship at Abilene Christian University [ACU Gift Records, ACU Box
29132, Abilene, TX 79699], Wilbarger Street Church of Christ [2515 Wilbarger St, Vernon,
TX 76384], or Prestoncrest Church of Christ [6022 Preston Crest Ln, Dallas, TX 75230].
Robert Douglas Orr
Paid 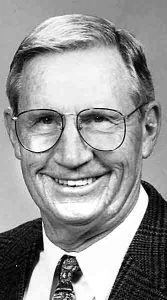