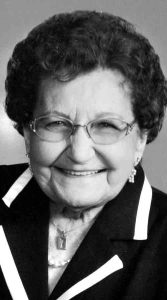 Edna Ruth Alexander, 90 of Vernon, Texas, died on Thursday, Dec. 5, 2019, in Crowell, Texas.Services will be Monday, Dec. 9, 2019 at 2 p.m. at St. Paul Lutheran Church with Rev. Paul Neuberger offi ciating. Interment will be held at Wilbarger Memorial Park under the direction of Sullivan Funeral Home.Edna was born Sunday, Sept. 1, 1929 in Wilbarger County, Texas. She was the daughter of the late Fred Wilhelm and the late Olga Anders Wilhelm. She married Kenneth Perry “KP” Alexander on June 20, 1948 in Vernon. He preceded her in death on Sept. 21, 2010. She was a graduate of Lockett High School. She was a long time sales clerk for Osbornes. She was a member of St. Paul Lutheran Church.Edna is survived by her son, Kenny Alexander of Vernon, Texas, one brother, Freddie Wilhelm and wife Pam of Mart, Texas, one sister, Peggy Correno of New Jersey, two grandsons Cody Alexander and wife Becky of Vernon, Cole Alexander and wife Susan of Vernon, granddaughter Lacy Smith and husband Ty of Crowell, seven great-grandchildren, her son-in-law Edward Crosby of Crowell.She was preceded in death by her daughter Linda Crosby.Visitation will be Sunday, Dec, 8, 2019 at 6 to 7 p.m. at Sullivan Funeral Home.Memorials can be made to American Cancer Society.Online condolences may be made to the family at www.sullivanfuneralhomevernon.com.