Jack Edwin Haynes was a 20-year-old torpedoman’s mate, third class, in Hawaii during the week before Christmas 1944. He was jovial and burning through his paycheck while staying at the beach-front 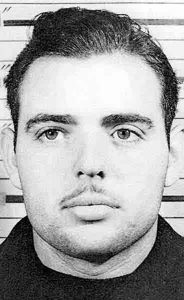 But it was also a nervous time as he waited for the call to board his submarine, the USS Swordfish. The ship would eventually set sail from Pearl Harbor on Friday, Dec. 22, 1944 — tasked with a classified mission to photograph the beaches off Okinawa in preparation for the American amphibious assault of the Japanese island.

Before the ship left dock, Haynes sent out a number of post cards to his friends and family in Wilbarger County, he mailed them out that Friday morning. Later that day he wrote a longer letter, addressed to his parents in Lockett. The  Submarine Service envelope was postmarked: December 22, 1944.

“Dear Mother and Dady,” Haynes wrote his parents. “I guess you will be glad to know that I am still able to kick.”

Haynes, born in Lockett, had lettered in football at Vernon High School in the fall of 1942 and then enlisted in the Navy on Dec. 7, 1942 – the one-year anniversary of the Japanese attack on Pearl Harbor.

Haynes, along with five of his friends, left Vernon for Fort Worth on the 9:50 a.m. train on Dec. 1, 1942. They were planning to enlist together in the Coast Guard. But they ended up in the Navy. Going with Haynes to enlist were Five-in One 1941 graduates and Texas Tech students Boyd D. Burelsmith, Ray Price and Elbert C. Carter, Five-in-One 1940 graduate and all-county basketball star Steve Clark and another graduate Dewitt Edwards, Jr. All but Edwards went to basic training together at Great Lakes Naval Station. Edwards is listed as having to have a “major surgery” and was not accepted.

After completing basic, those five newly christened seamen were reported home visiting their parents on leave in February 1943. Then they went their separate ways. Haynes left for torpedo school in March, 1943 at New London, Conn., graduating in September 1943 with his twin dolphin pin. He sailed for Hawaii in late 1943 and spent the next year on active duty assigned to the USS Swordfish.

The Swordfish had a distinguished service record in World War II, including assisting in the evacuation of the president of the Philippines. During that time in the Pacific it sank 21 enemy ships.

On that fateful 13th mission Haynes was joined by at least seven other Texans on the Swordfish, including William E. Russell of Crowell — just 20 miles from Haynes’ home in Lockett. The total number of officers and crew on the Swordfish was 89.

The Swordfish left Pearl Harbor on Dec. 22 1944 for its 13th patrol, in the vicinity of Nansei Shoto. The ship stopped for fuel at Midway on Dec. 26 and left that same day. In addition to the regular patrol, the Swordfish was ordered to conduct photographic reconnaissance of Okinawa’s beaches in preparation for an amphibious assault. After patrolling, on Jan. 9, the ship was directed to Okinawa to carry out its recon mission. The mission was expected to take seven days and then the ship was to return to Midway. The ship never returned.

It was believed that on the recon patrol off Okinawa the ship hit a mine, or was sunk by depth charges.

On Feb. 4, 1946, the Vernon Record reported that the Haynes family had received a message from Secretary of the Navy James Forrestal. It read: “Your son, Jack Haynes, topedoman’s mate third class, USNR, has been carried on the official records of the Navy Department in the status of missing in action as of 29 January 1945. He was serving on the Swordfish when that submarine failed to return from patrol operations in the Pacific area.

“On 22 December 1944 the Swordfish departed from Pearl Harbor territory of Hawaii, took aboard fuel at Midway Island on 26 December 1944 and proceeded to her patrol area in the vicinity of Okinawa. On 3 January 1945 a message was received from the Sword¬fish, but the submarine failed to return to Saipan on or about 29 January 1945, in accordance with her schedule and no further information has been received by the Navy Department concerning the fate of the submarine or her crew.

“In view of the length of time that has now elapsed since your son was reported missing and because there have been no official nor unconfirmed reports that any of the personnel of the vessel survived or were taken prisoner of war, I am reluctantly forced to the conclusion that your son is deceased.

“I extend my deepest sympathy to you in your sorrow. It is hoped that you may find comfort in the knowledge that your son gave his life for his country, upholding the highest traditions of the Navy.”

In Lockett, the family received the Christmas letter from Jack. After learning of their son’s death, the family stashed the letter away.

Now 75 years after the submarine was lost with all hands, that letter has resurfaced and the current owner of the former Haynes’ home hopes to reunite it with his family.

Lockett resident J.R. James described how the letter was found.

“I’m going on 92 years old. Several years ago, in the 1970s, we bought the house that his mom and dad had lived in after they passed away. It was right down the block from our house. The heirs sold it, and we wanted it for a rent house. They got what they wanted out of it. In the process of our cleaning it out, we found this letter. It was in a pouch,” James said. 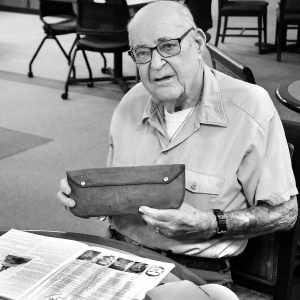 JR James with the pouch that he found Haynes’ letter in. James never read the letter.

“I have not read this letter. I felt it was private between him and his family and I’ve kept it that way. There was too much heartbreak for families in that war and I recognize the sacrifice they made,” James said.

James had forgotten about the letter until recently when he was reading a story in the Vernon Community Guide on the sailors from the Five-in-One community during World War II.

“I remembered that letter,” James said, and now he has come to feel that maybe others, especially Jack’s family, should read the letter.

James had a brother Clyde James, and a brother-in-law Joe Manard, who were both prisoners of war. Another brother-in-law, Wesley Haynes, was killed when he stepped on a land mine in the Italy campaign.

“I had a sister, Beatrice, her husband was killed over there in Italy while she was pregnant. Her son never got to see his dad. 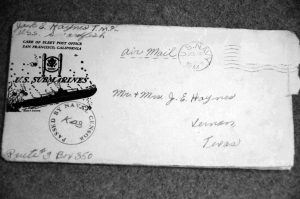 He said he got to know his dad through those letters he wrote his mom. He said we should try to find his family, they might want that letter,” James said.

James said that they have tried to find local relatives of Jack but have been unsuccessful.

With James’ approval and as witness, the Vernon Record opened the letter and created an electronic version. Out of respect for the family, we will keep the contents of the letter private until an heir is located.

James has entrusted the letter to the Vernon Record newspaper and asked that the newspaper assist in finding Haynes’ family members. If no family can be found, James has asked that the letter be donated to a museum that will preserve and display it. Anyone with information on the Jack Haynes family can contact Daniel Walker at the Vernon Record by email at dwalker@vernonrecord.com or by phone at 940-552-5454.