Linda Lue Hamm Plummer of Plano, Texas passed
away on Feb. 4, 2020 at the age of 75.
She was born on Oct. 2, 1944 to Clifford Cortez Hamm
and Thelma Essie (Price) Hamm in Vernon, Texas. Linda
graduated from Vernon High School. She received her
bachelor’s degree in Education from North Texas State
University, now University of North Texas in Denton,
Texas. Linda and Jerry Plummer grew up together in
Vernon, where she was the homecoming queen, and he
was the captain of the football team. Upon high school
graduation, Jerry attended Texas Tech University on a
football scholarship and Linda attended University of
New Mexico. Quickly they decided being apart was
unacceptable, and Linda married Jerry Lynn Plummer on
May 14, 1964 in Lubbock, Texas. They moved to Plano
to build a life 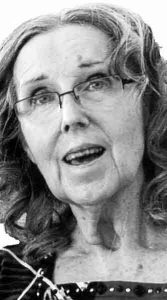 together. She taught elementary school in
the Plano ISD for 35 years and was recognized several
times as teacher of the year.
Linda and Jerry literally traveled the world together,
back when the world was larger and not everyone had an opportunity. She collected
masks from all over the world and loved to share stories about different customs and
cultures.
Linda loved everyone equally. Without anyone knowing she would volunteer for crises
hotlines, support disadvantage children, help the homeless with selfl ess time and energy.
She loved the underdog…she will be missed.
After Jerry’s passing in 2011, he was cremated and Linda decided that it was still not
time to be apart, so she brought him home with her and now they will be laid to rest
together and forever. In summary – they were never apart for 70 years.
Linda is survived by her sons, Jeff Plummer and wife, Sarah of Allen, Texas and Kevin
Plummer of Dallas, Texas; and her grandchildren, Joseph Plummer, Madison Plummer,
Jeffrey Plummer Jr., Matthew Plummer, and Jake Mullins.
She was preceded in death by her parents, husband, Jerry Plummer; and her brothers,
Larry Hamm and Ronnie Hamm.
A funeral service was held at 3:30 p.m., Saturday, Feb. 8, 2020 at Turrentine-Jackson-
Morrow Funeral Home Chapel, 2525 Central Expressway North, Allen, Texas 75013.
Interment followed at Ridgeview Memorial Park in Allen. The family received friends
during a visitation on Friday evening from 6 p.m. until 8 p.m. at the funeral home. To
convey condolences or to sign an online registry, please visit TJMfuneral.com.