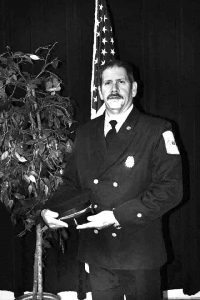 ,Victor “Vic” Joseph Oleson 53, of Vernon, Texas, died on Tuesday, Feb. 18, 2020, in Dallas, Texas.A memorial service will be held Friday, Feb. 28, 2020 at 5 p.m. at Wilbarger Auditorium. Vic was born Tuesday, Oct. 11, 1966 at Holloman Air Force Base in Alamogordo, N.M. He was the son of the late Harry Oleson and the late Grace Romero. He married Rebecca Ainsworth on Aug. 26, 2002 in Vernon, Texas. He served in the U.S. Army for four years. He was a Reserve Lieutenant for the Vernon Fire Dept. and an EMT for 13 years, and had a total of 30 years as a fi refi ghter. He retired in March 2019.He also was a Wilbarger County Weather Spotter. He worked as the Wilbarger County/ Vernon Emergency Management Coordinator, Wilbarger County Auditorium Technician, City of Vernon Facilities Maintenance Director. He was a contractor with Aramark School Maintenance, and he owned and operated Vic’s Mobile Lock and Key. He was a member of the Fire and Iron Motorcycle Club.Vic is survived by his wife Rebecca Oleson of the home, two sons, Andrew (Drew) McWilliams of Tulsa, Okla., and Zachary McWilliams of Tulsa, Okla., daughter, Olivia Zamora of Wichita Falls, Texas, two granddaughters Gabryana Patterson of the U.S. Navy, and Andrea McWilliams of Vernon; two sisters, Kathy Manzo and husband Marcos of Madera Ranchos, Calif., and Denise Cox of Fresno, Calif., step-brother Brock Marvel of Bellingham, Wa., his step-father Lawrence Guidry of Alamogordo, N.M.Online condolences may be made to the family at www.sullivanfuneralhomevernon.com.