Three Vernon Lions pitchers combined for a no-hitter on Monday night, as the Lions defeated Henrietta 4-0 in Vernon’s home opener.

In the first inning, Vernon Lions Varsity got their offense started when Boatman tripled on a 1-0 count, scoring one run.

Lavery Gonzales got the win. He pitched three hitless innings, striking out two. He set down the first eight batters he faced in order.

Jacob Boatman and Joseph Boone came out of the bullpen in relief. Boone got four strikeouts as he set down six of the seven batters he faced, giving up one runner to an infield fielding error. Boatman recorded the last six outs to earn the save as he struck out five and also gave up just one baserunner on an outfield error.

Boatman was one for three at the plate with an RBI, he also had two stolen bases. Boatman got the Lions on the board in the bottom of the first after Lavery Gonzales drew a walk. Boatman tripled to center to plate Gonzales. Boatman then scored on a wild pitch steal and it was 2-0.

The Lions have a busy end of the week on the road. They are scheduled to play Perrin-Whitt at Henrietta on Thursday, play Brock at Brock on Friday, and Bonham in Bowie on Saturday. 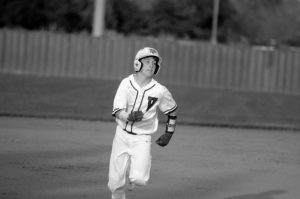 Vernon’s Lavery Gonzales heads for third base in the Lions 4-0 win over Henrietta on March 2, 2020.