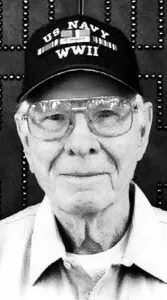 arch 6, 2020, in
Vernon, Texas.
Services will be
Monday, March 9, 2020
at 10 a.m. at Sullivan
Funeral Home Chapel
with Dr. Derrell Monday
offi ciating. Interment
will be held at Wilbarger
Memorial Park under
the direction of Sullivan
Funeral Home.
Wayne was born
Saturday, Sept. 12, 1925
in Davidson, Okla. He
was the son of the late
John Milton Hendrix and
the late Gertrude Fletcher
Hendrix. He married Avinell Dyer on Aug. 18, 1947 in
Wichita Falls, Texas and she preceded him in death Feb.
11, 2015. He moved to Vernon in 1948. He served in the
U.S. Navy during WWII. He established the Crime Stopper
Program. He was a member of the Optimist Club, the Santa
Rosa Palomino Club, Vernon Masonic Lodge and was a
director of the Boys Club. He was Retired Chief of Police
for Vernon Police Dept. He was a member of First Baptist
Church, and he served as a Deacon of the church.
Wayne is survived by his daughter, Karla Beth Hendrix
of Vernon, Texas; grandson Philip Brandon Rhodes and
wife Blair of Austin, Texas; granddaughter Ashlee Beth
Cheff and husband Ryan of Plano, Texas; three greatgrandchildren
Belle, Caden Wayne and Briar.
The family will be at 2508 Crescent Drive.
Visitation will be Sunday, March 8, 2020 at 5 to 6 p.m. at
Sullivan Funeral Home.
Memorials can be made to Wilbarger Humane Society,
Boys and Girls Club or Hospice of Wichita Falls.
Online condolences may be made to the family at www.
sullivanfuneralhomevernon.com.