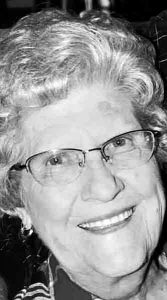 n Bell Martin, 93 of Abilene, Texas died on Sunday, March 8, 2020, in Abilene, Texas.Services will be Thursday, March 12, 2020 at 11 a.m. at Sullivan Funeral Home Chapel with Dr. Derrell Monday offi ciating. Interment will be held at Wilbarger Memorial Park under the direction of Sullivan Funeral Home.Kathleen was born Tuesday, Nov. 9, 1926 in Vernon, Texas. She was the daughter of the late James Thomas Upton and the late Mattie Gertrude Burchett Upton. She married R.L. Martin on July 24, 1945 in Altus, Okla. He preceded her in death on March 9, 2009. She had lived in Vernon all of her life. She was a Baptist, devoted wife, mother and grandmother.Kathleen is survived by her daughter, Barbara Karcher and husband Don of Abilene, Texas; four grandchildren Heather Poling, Clayton, N.M., Jennifer Scott, Posper, Texas, Holli Cantrell, Tucumcari, N.M. and Cody Karcher, San Angelo, Texas; seven great-grandchildren and several nieces and nephews.Kathleen was preceded in death by her parents, husband, two sons Ronnie Martin in 2006 and Kenny Martin in 1957 and fi ve brothers and two sisters. Memorials can be made to the Hendrix Hospice. Online condolences may be made to the family at www.sullivanfuneralhomevernon.com.