Geraldine, “Geri” Chisholm, 85, a long-time resident
of Vernon, Texas passed away, due to complications of
Alzheimer’s disease, on March 17, 2020 in Vernon,
Texas.
Geri was born Wednesday, Oct. 17, 1934 in Donna,
Texas. She was the daughter of the late James Robert
Jones and Mary Rebecca /Andrews /Jones. She married
James Earl C 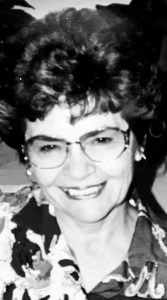 hisholm on October 21, 1950 in Vernon,
Texas
Geri is survived by her husband, James of Vernon,
Texas and also four children: Debbie Pilcher and her
husband Joe of Haughton, LA; Mike and his wife
Sherilyn of Waxahachie, Texas; Jeff and his wife Tina
Marie of Boyd, Texas and Tina Hendrickson and her
husband Rusty of Kerrville, Texas. She is also survived
by nine grandchildren, three great-grandchildren and
several nieces and nephews.
Geri was preceded in death by her parents, three
brothers and five sisters.
The Jones family moved to north Texas around 1940.
Geri attended Five-in-One school in Lockett thru 8th
grade, then attended Vernon High School. She was a homemaker with four kids, then
worked as the office manager at State Farm Insurance in Vernon. She was an active
member of the Wilbarger Street Church of Christ, teaching a children’s class for 20 years.
She enjoyed music, camping, sewing and cooking for her family.
The family wishes to thank all those who prayed for her and visited her in her last days.
The family would also like to thank the staff at Advanced Rehab in Vernon for the
excellent care and support they provided.
Visitation will be from 9 a.m. to 10 a.m. on Saturday, March 21, 2020 at Sullivan’s
Funeral Home. Funeral services will be 10 a.m., March 21, 2020, at the Sullivan’s Funeral
Home Chapel with Bryan Nix officiating. Interment will be held at Wilbarger Memorial
Cemetery. Grandsons will serve as pallbearers.
Memorials may be made to Shriners Hospital for Children or your favorite charity.