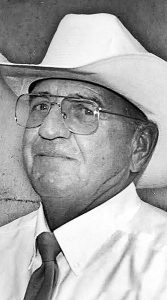 March 30, 2020 surrounded by his family.
Kenny was born August 20, 1950 in Vernon, Texas. He was the son of the late Kenneth Perry Alexander and Edna Ruth Wilhelm Alexander.
He married Sandra Kay Pennington
on April 18, 1969 in Vernon, Texas. She preceded him in death on November 18, 2019.
Kenny attended Lockett High School before going to work at the Waggoner Ranch in 1968. He later worked for the Johnson-Ekern ranch then started his own cattle ranch in northern Wilbarger County. He also had a long career in law enforcement. Kenny
became a police officer for the City of Vernon in the 1980s and went on to wear a total of four more badges while serving Wilbarger County as deputy, chief deputy, sheriff and constable. He also served as Wilbarger County Commissioner for Precinct 1. He enjoyed serving the people of Wilbarger County but he was always a cowboy at heart. The country life he and Sandy built was a great source of pride. Even greater yet is the legacy he built through his two sons and grandchildren.
Kenny is survived by two sons, Cody Alexander and wife Becky of Vernon, TX and Cole Alexander and wife Susan of Vernon, TX. His three grandchildren Cooper Alexander, Austin Alexander and Madison Alexander.
He is also preceded in death by his sister Linda Ruth Crosby.
Visitation will be Wednesday, April 1, 2020 at 6:00 to 7:00 pm at Sullivan Funeral Home.
Hillside graveside service will be Thursday, April 2, 2020 at 2:00 pm at 19965 CR 107 N.
Memorials can be made to Hospice of Wichita Falls.
Online condolences may be made to the family at www.sullivanfuneralhomevernon.com