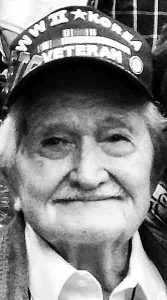 Hadley,
94 of Vernon, Texas
died on Friday, May 15,
2020, in Wichita Falls,
Texas.
There will be a
memorial service at
a later date at Dallas
Fort Worth National
Cemetery.
Clyde was born
Friday, Dec. 27, 1925
in Floydada, Texas. He
was the son of the late
Thomas Hadley and the
late Bell Iley Hadley.
He married Katherine
Allene Harrison on
April 27, 1946 in Fort
Worth, Texas. She
preceded him in death April 11, 2017. He had lived in
Vernon since 1967. He was Construction Superintendent
on building of the Vernon State Hospital North Campus.
He served in the U.S. Navy during WWII and the Korean
Confl ict.
Clyde is survived by his four daughters, Phinetta
Hunter and husband Gary of Gainesville, Texas, Kathy
Baldwin and husband Jerry of Wichita Falls, Texas,
Nancy Johnston and husband Rodney of Odell, Texas
and Janet Railsback and husband Mike of Vernon, Texas;
his son Roy Hadley and wife Ruthie of Georgia, 13
grandchildren; 16 great-grandchildren and 6 great-greatgrandchildren.
Online condolences may be made to the family at
www.sullivanfuneralhomevernon.com.