Around 200 people marched in near 100-degree heat Saturday afternoon from Lyday Park in north Vernon to the Wilbarger County Courthouse. The march was billed as a peaceful march to bring attention to racial injustice and their were no problems reported.

The crowd sang, and chanted “Black Lives Matter,” “I can’t breathe,” “Mama,” and Say his name,” “George Floyd” as they marched down Wanderer Street to the Vernon Police station and then turned onto Main Street/U.S. 183 and marched to the Wilbarger County Courthouse.

The only issues were minor. One counter protestor with a Confederate flag watched on Main Street. And a woman from California attempted to heckle the crowd, the press and police at the courthouse.

The march ended with a rally on the courthouse steps. The national anthem was sang, with many taking a knee. Speeches and prayers were offered by ministers from North Vernon churches as well as community officials including the police chief and city mayor. 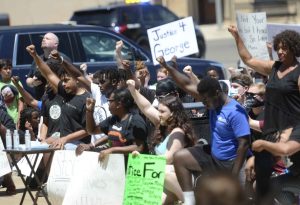 Some protestors kneel, other raise a fist, and others cover their hearts as apart of a protest rally at the Wilbarger County Courthouse in Vernon, Texas on Saturday, June 6, 2020. Around 200 people were in attendance at the peaceful rally.
Daniel Walker/Vernon Record