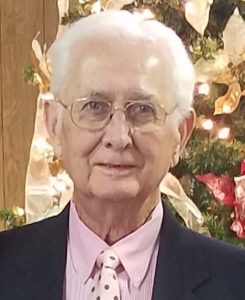 Ray Phillips of Odell. Texas passed peacefully from this life, at the age of 84 years, on Tuesday, June 9, 2020. He was born April 19, 1936 in Vernon, Texas.
Ray was a faithful member of the Odell Baptist Church and served as music director for many years. He was also President of the Bell Cemetery Association and President of the Odell School Reunion.
Ray graduated from Odell High School in 1953. He went on to attend Decatur Baptist College, Midwestern and Wayland University where he studied agriculture. After college, Ray enlisted in the US Army and served his country proudly from 1958 to 1962, where he was honorably discharged.
Ray worked in various agriculture industries after his service until moving to Dimmitt, Texas in 1969 to take a job with Western Ammonia that later became Goodpasture Inc. He retired from Goodpasture in 2001 after 32 years.
Ray was preceded in death by his wife of 41 years. Carol Phillips, his parents, Ordis and Willie Mae (Farr) Phillips, a grandson, Jansen Noel Flowers, and a step great-grandson, Evander Stevenson.
Ray is survived by two daughters, Kay Dulaney (Joe Brad) of Bossier City, La., and Lou Baker of Levelland, Texas; two stepsons, Jeff Strickland and Mark Strickland, both of Vernon, Texas. He is also survived by his five grandsons, Dallas Dulaney, Chace Dulaney (Jordan), and Brady Dulaney of Bossier City, La., Kelton Flowers of Brownfield, Texas, and Dagon Flowers of Meadow, Texas; four step-grandchildren, Dylan Strickland, Alyssa Wooten, Seth Strickland, and Mason Strickland, all of Vernon, Texas; great-grandsons Jade Dulaney and Henry Dulaney of Bossier City, La; step-great grandchildren, Noah Wooten, Eli Stevenson, and Ensley Stevenson all of Vernon, Texas; one brother Grover (Adrienne Hyle) Phillips of Stillwater, Okla., and one brother-in-law, Phillip Duke of Vernon, Texas.
Services will be Saturday, June 13, 2020 at 11 a.m. at Odell Baptist Church with Rev. Wallace Clay officiating. Interment will be held at Bell Cemetery under the direction of Sullivan Funeral Home.
In lieu of flowers donations can be made to Bell Cemetery Assn. at 13350 CR 100 West, Vernon, TX., 76384
Online condolences may be made to the family at www.sullivanfuneralhomevernon.com.