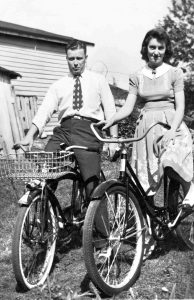 Mary Louise was born on June 17, 1920 in Hopkinsville, Ky., a daughter of Samuel and Rena (Stanton) Stokes.

She and her younger brother, Samuel Edward (Buddy) Stokes, were orphaned at an early age. While initially living with grandparents, Mary Louise attended school for two years and after that was home schooled and self-taught. However, she had a love of education and was determined to learn as much as she could, passing her knowledge down to her younger brother as well. She often said she would have loved to be a teacher.

During the two years she attended school, she also took her little brother along with her because at that time there was no one to look after him during the day. The youngsters were living with grandparents, and when their grandmother passed away, that left only their grandfather, who had to work the fields, leaving no one at home to care for the younger brother while she went to school.

“He couldn’t stay by himself,” Mary Louise said. “So I just took him with me, and he sat beside me at my desk. No one seemed to mind that he was there.”

The children often went to school without any lunch, and the teacher in the one-room school house noticed the children would go off by themselves during the lunch period instead of eating with the other students. The teacher began bringing food to share with the two. She told the youngsters that she always packed too much lunch to eat by herself and would ask them to do her a favor by helping her eat it.

It was only later that Mary Louise realized what the teacher was actually doing.

“She made us feel like we were helping her by eating the extra food. She didn’t make a big deal out of it, and she never shamed or humiliated us in front of the other students.”

That act of kindness was never forgotten.

After their grandfather could no longer take care of the children, they lived with other relatives,  were in an orphanage and for a brief time in a foster home.

“In those days, people were struggling to take care of their own children. There wasn’t extra money to take in two more mouths to feed, so that’s why we were moved around so much,” she explained.

But eventually an aunt and uncle took the children to live with them on their tobacco farm outside of Hopkinsville. The children helped plant and harvest the tobacco and other crops as well as doing other chores, such as milking the cows, feeding the chickens and gathering the eggs.

“I didn’t mind feeding the chickens, but I never learned to milk the cows,” she said. “I was afraid of them,” adding “It was a hard life, but we didn’t know any different. It was just ‘our life.’”

Four days after her 21st birthday, she married Smith D. Killebrew on June 21, 1941 in Hopkinsville, Ky.  The two had met when Mary Louise  went to work at a clothing factory in Hopkinsville owned by Killebrew’s uncle and where he also worked.

In just a few months, the United States would enter World War II, and the young couple knew they would soon be separated.

“We were getting by on a lot of baloney sandwiches at that time,” Mary Louise laughed. “Gasoline was soon rationed, and we mostly rode our bicycles to whereever we wanted to go.”

Their first child, Joyce Ann, was born after the couple moved to Glasgow, Ky.  Smith served in the United States Navy during World War II while his wife and daughter returned to  Hopkinsville to wait for his return.

“Those were hard times while he was away, but we made it,” Mary Louise said. “He was very good about writing frequently, and I lived for those letters.”

Mary Louise noted that she had to use ration coupons during the war to make purchases for herself and daughter, such as sugar, flour, clothing and other necessities.

“Since I was raising a baby at the time, friends would often give me their coupons,” she recalled.

After the war ended, the little family moved to Madisonville, Ky.,where their second daughter, Mary Jane, was born. Later they moved to Newton, Miss., where Smith worked for a shirt fact0ry.

The Killebrews moved to Vernon in September 1949 from Newton, when Smith accepted the position of cutting room foreman at the Vernon Manufacturing Co. here, where Boy Scout pants were made and distributed throughout the world. He remained there until his retirement in 1982.

“He really loved working at the factory,” Mary Louise said.  “He was so good at his job. He should have been a tailor.”

The family had  a large garden where Smith grew tomatoes, cucumbers, potatoes, blackeyed peas, squash, strawberries, corn, and other fruits and vegetables

“He grew up on a farm in Tennessee,” Mary Louise  said. “And it was always in his blood. He loved to plant the garden and was so proud when the fruits and vegetables came up.”

Mary Louise was well known for her home cooking, and she was quite apt at making delicious dishes from the garden’s bounty. She cooked three meals a day, and the family very seldom ate out. Sunday dinners were always special with such fare as fried chicken, homemade biscuits and gravy and other dishes.

On those infrequent occasions when they did eat out, the family would most often go to the Susie Q, Long’s Cafe or the Canton Cafe.

‘Those were our favorites,” she recalled.

Pies were also a specialty, and she frequently treated the family as well as friends and neighbors to her fried peach or lemon pies.

Mary Louise always enjoyed reading, especially her Bible and also historical books. She was intrigued by history and never tired of learning about events that had happened years ago. She also liked to watch her favorite television shows. which over the years included the “Tonight Show” with Johnny Carson and game shows such as. “The Price Is Right,” “Jeopardy” and “Wheel of Fortune.”

She was a good seamstress. making many of her daughters’ clothes while they were growing up.

In the 1950s, she and Smith took in a teenage nephew who had no place to live. She treated him as her own son for the years he stayed with them. and the girls were excited to have an older brother.

Mary Louise has been a member of the First United Methodist Church for over 70 years, as the family first joined when they moved to Vernon. She was a Sunday School teacher for the elementary level, and she and her husband were also assistant youth directors at the church as well as being members of the Amigos Sunday School Class. She later joined the Lydia Sunday School Class.

For all of her adult life, she has been regarded by others as a “True Southern Lady.” Shy and humble, she spent her life loving and serving the Lord, helping others whenever she could, making a home for her family and being gracious and loving to all.

Smith passed away in 2003, but Mary Louise continued to maintain the home where she still resides.

Although now in frail health and unable to have visitors, she still loves stories of the “good old days.” Anyone wishing to share memories with her or send her a birthday card may do so by mailing to Mary Louise Killebrew, 920 Marshall, Vernon, Texas 76384.