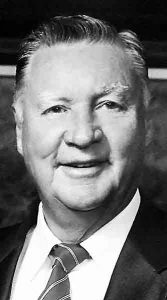 l was born 1933 in Pueblo, Colo. and died June 24, 2020 in Vernon, Texas. He and his parents moved to Chillicothe, Texas, in 1939 so that they could help and eventually take over the farm from his grandparents, Will and Carlie Johnson. He attended Medicine Mound school until he transferred to Chillicothe and graduated from Chillicothe High School. Joel attended Midwestern State University and met the love of his life, Mary Lee “Bitsy.” He graduated early in 1956, and they married on March 16, 1956. In college, he was also a member of a Rockybilly band with his best friend, Lew Williams. Joel was sent to Army Officer’s School in Fort Sill after college until he received an honorary discharge to come back to Chillicothe to take over the farming from his ailing mother and grandmother. He then farmed and ranched and worked at the First National Bank in Chillicothe for years. He was Chairman of the Board at the First National Bank of Chillicothe. He graduated with a Masters in Banking from Southern Methodist University. While employed as Vice President, he was a witness to the only bank robbery in Chillicothe history. He also enjoyed working deals in the oil business with D.D. Burrell and Joe Tom Nuckles. Joel joined the Board of Directors at the Waggoner National Bank in Vernon in 1976 and was on the board of directors for 39 years. Joel had the privilege of being Chairman of the Board from 1985-2004. Joel was a member in the Chillicothe Lions Club over 65 years. He was a member of the First United Methodist Church in Chillicothe. He coached numerous little league baseball and basketball teams through the years. Joel loved to go shooting, and he especially loved spending time with his family.Joel was preceded in death by Bitsy and his parents, Joe and Jewell McClellan, and older sister Peggy. Joel was a lifelong resident of Hardeman County. He is survived by his children: Kay, Joel III, Michael, and Lea; eight grandchildren: seven girls and one boy, and two great-grandchildren. Visitation was Sunday, June 28, 2020 from 7 p.m. to 8 p.m. at Smith Chapel in Chillicothe, Texas. Memorials can be made to First United Methodist Church, Chillicothe, Texas.