Incumbent John Wright lost to Billy Taylor for the Commission Precinct 1 nomination by a 310 (62%)to 190 count. Taylor had led in the first round 343 votes to 252 for Wright and 157 for Guy Spears.

Incumbent Sherrie Campsey beat Angie Boyd for Tax Assessor/Collector in the runoff by a 741 (55%)to 610 count. In the March primary, Boyd had led by 30 votes in the three-person field.

Both the republican and democratic nominees to replace Mac Thornberry in U.S. House District 13 were settled in the runoff.

Ronny Jackson finished a distant second to Josh Winegarner in the first round back in March’s republican primary. Out of 15 candidates, Winegarner had 40 percent of the vote to 21 for Jackson. That flipped in the runoff as Jackson looked to have pulled the upset, pulling 54 percent of the vote in the district, with a few precincts still unreported.

He will likely face Gus Trujillo, who appeared to have claimed the democratic nomination over 2018 nominee Greg Sagan. Trujillo won Wilbarger County with 57 percent of the vote.

Incumbent Larry Doss, of the 7th Court of Appeals, looked to have been returned to office. He also won Wilbarger County with 69 percent of the vote.

For the democratic nomination for U.S. Senate, Royce West appeared to have lost to MJ Hegar, who also won Wilbarger County with 55 percent. 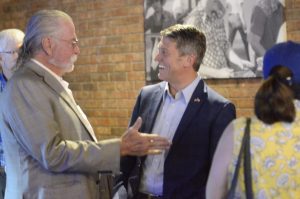 Ronny Jackson (right) a candidate for U.S. House District 13 visits with Vernon attorney Don Ross Malone during a meet-and-greet with the candidate, hosted by the Wilbarger County Republican Party on Monday, June 8, 2020 at Benito’s restaurant. Jackson is in a runoff election with Josh Winegarner to be the Republican nominee to replace Mac Thornberry in the 13th district. The runoff will be July 14.
Photo by Daniel Walker/Vernon Record