Representatives from the proposed Adams Creek Solar Project met with the Vernon College board of trustees last week. The solar project is planned in eastern Wilbarger County under development by Savion. The company requested a tax value limitation agreement with the Harrold ISD in February and is expected to ask tax breaks from other county entities later this summer. It will also be taxable by Wilbarger County, Vernon College and Wilbarger general Hospital District.

Mike Fry, of consulting firm K.E. Andrews, and Eric Clifft, project manager of Savion LLC, said they would like the College trustees to consider offering them a property tax break on the project, which is expected to cost $225 million.

“These tax discussions are never very much fun for us, but are a necessary evil for power production,” Clifft. “There is a long history of tax abatements in energy development. We are not trying to get corporate welfare. We are trying to squeeze out every dollar. The way I see it is this increases the feasibility of a project happening.”

He said that they had 3,300 acres leased, but would probably not use that much. He did not publicly disclose in the meeting where the location was. However, state filings show the facility will encompass approximately 2,618 acres, and be located in the northeastern portion of the county, on both sides of FM 370. 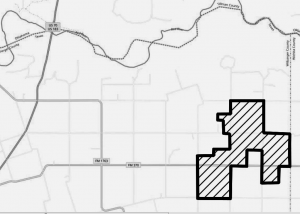