Elaine Fieldhouse, 83 of Vernon, Texas, died on Saturday, Aug 1, 2020, in Vernon, Texas.Services will be Friday, Aug. 7, 2020 at 10 a.m. at Calvary Baptist Church with Rev. Toby Castleberry offi ciating. Interment will be held at Wilbarger Memorial Park under the direction of Sullivan Funeral Home.Elaine was born Saturday, Jan.16, 1937 in Fort Worth, Texas. She was the daughter of the late Whitley Charles Terry and the late Sara Peacock Terry. She was raised in La Porte, Texas and lived in a log cabin hous 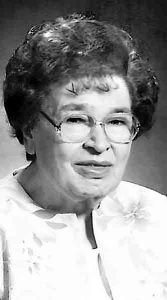 e from 1949 to 1963. After high school she went to Texas Woman’s University and earned a degree in Occupational Therapy which lead to her job at Dallas Parkland Hospital as Chief of Occupational Therapy. On March 8, 1969 she married Richard Fieldhouse of Lansing, Illinois whom she met at First Presbyterian Church in Dallas. In 1972 they moved to Vernon. In 1975 they adopted their fi rst son Stephen and in 1977 they adopted their second son Loren. Elaine worked at Vernon State Hospital and MHMR in Vernon. She was a member of Boys & Girls Club, Meals on Wheels, Community Concert Assoc., and Happy Hearts. She was a tutor in the Adult Literacy Program and coordinator for Adult Ministry. She was a member of Calvary Baptist Church, and Elaine led the Happy Hearts program for senior citizens for about 20 years. On April 12, 1991 she was honored as Community Woman of the Year. Her husband was known as the husband of the cake lady because of the many cakes she decorated for people.Elaine is survived by her husband Richard Lee Fieldhouse of the home, two sons, Stephen Lynn Fieldhouse and wife Mary of Vernon, Texas and Loren David Fieldhouse of Houston, Texas, one brother, Charles Lance Terry and wife Kay of Granbury, Texas, two grandchildren Ragan and Ryan both of Vernon, Texas, one niece Megan Terry Geller of Arlington, Texas, nephew Gregory Charles Terry of Hawaii. Visitation will be Wednesday, Aug. 5, 2020 from 6 p.m. to 7 p.m. at Sullivan Funeral Home.Memorials can be made to Boys and Girls Club of Vernon or Sara Peacock Scholarship at Vernon College.Online condolences may be made to the family at www.sullivanfuneralhomevernon.com.