The Vernon Lions lost their season opener at Big Spring 36-14 last Friday. It was close at half, as the Lions trailed 18-14. Christian Ochoa led Vernon with 14 carries for 92 yards and a TD. 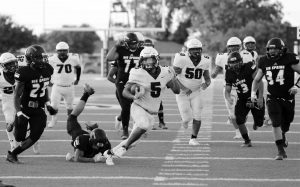 Vernon will be back in action on Friday at home, against Gainesville, with kickoff at 7 p.m. Tickets must be prepurchased at the VISD transportation center on Main Street.

Vernon lost at Gainesville last season by a 55-24 score. The Lions will be no stranger to Gainesville’s top returning weapon. Christopher Feagins is back as a senior at running back. Last year he had touchdown runs of 58 and 52 yards

The Leopards lost at home last week to the Caddo Mills Foxes by a 42-20 score. The Leopards secondary struggled with the Foxes deep passing game, giving up passing scores from 75 and 36 yards. 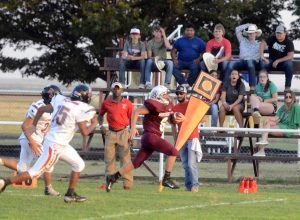 Northside’s Matthew Brooks outruns the Patton Springs defense for a 72-yard score, the first TD of the 2020 season for Northside.
Daniel Walker/Vernon Record

The Northside Indians topped Patton Springs 42-34 in the season opener last Thursday. Matthew Brooks got things started as he outran the defense down the sideline for a 72-yard first quarter touchdown. Northside will host Rule this week. It was originally scheduled as a road game, but was changed on Monday to be played at Northside at 7:30 p.m. on Friday. The Bobcats won 42-41 in their opening game against Wilson, last week.

The Chillicothe Eagles lost to the Hedley Owls, 47 -44  last Friday night. Alex Guffey led the Eagles with 15 rushes for 152 yards and two touchdowns.

The Eagles will be in action in a  neutral site game at Hedley against Darrouzett on Thursday. They lost 67-0 to Wildarado last week. 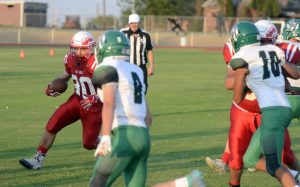 Chillicothe’s Julian Vasquez scores a touchdown for the Eagles in the season opener against Hedley.
Daniel Walker/Vernon Record

Crowell with a Bye

Crowell topped Baird 58-12 in the season-opener on Friday, ending the game in the 3rd quarter. The game was tied 6-6 after one quarter, and it was 36-6 at half. Wildcats quarterback Seth Bearden completed 6 of 9 passes with 151 yards and five TDs.

The Crowell Wildcats have a bye this week  and their next game is scheduled as hosting Richland Springs on Sept. 11.