October is National Domestic Violence Awareness Month and local officials are calling on citizens to actively work toward eradicating domestic violence in our community.

At a signing ceremony on Tuesday at Vernon City Hall, Mayor Pam Gosline signed an official proclamation demonstrating the city’s commitment to fighting domestic violence. The proclamation recognizes that “…the impact of domestic violence is wide ranging, directly affecting individuals and society as a whole, throughout the United States, and here in the City of Vernon.” The proclamation also recognizes the work being done by local family violence center, Texoma Alliance to Stop Abuse (TASA), and the importance of their collaboration with local law enforcement agencies, like the Vernon Police Department in the formation of a Domestic Violence High Risk Team.

“It takes a holistic approach to tackle domestic violence in our community. As an advocate, I am grateful for the cooperation from the VPD and the CA and DA’s offices in reviewing high risk cases, so that I can do my job in supporting and assisting victims. Because of this coordinated response, we are able to keep victims safe and hold offenders accountable,” says TASA Executive Director Rachel Lira.

TASA will be kicking off the month by hosting a golf scramble at the Hillcrest Country Club on Saturday, October 3, at 9 a.m. Registration for the event is $30 and includes breakfast and 18 holes of golf. Both individuals and teams are encouraged to sign up by contacting the Pro Shop at 940-552-5406.

On Thursday, October 22, residents are encouraged to wear something purple, the color of domestic violence awareness. “It can be purple socks, a ribbon, shirt, tie, or even a hat,” said Jon Whitsitt, TASA board member. “We just want people to see the color purple out in the community to show support for survivors of domestic violence.”

According to Lira, some of the usual awareness events have been impacted by Covid-19 and will not take place this year. TASA is considering holding their annual Domestic Violence Awareness Rally virtually, but no date has been announced.

DA Staley Heatly emphasized the importance of citizens educating themselves about family violence and being familiar with the resources that are available locally. “Talk to your friends and family members about the importance of a safe and healthy relationship,” Heatly stated. “Be aware of the signs of a potentially abusive relationship, and if you see something wrong, make sure to offer support and information about local resources.” 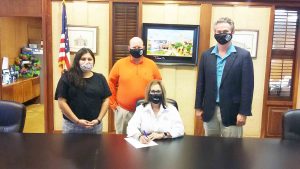