The Vernon Lions offense is improving each week, but it wasn’t quiet enough to get the lions in the win column last Friday, as they fell 28-22 to the Burkburnett Bulldogs.

The Lions fell behind early 7-0, on a 68-yard run from Burk’s Mason Duke on the Bulldog’s opening drive of the game. Then the Lions kicked it in gear. Christian Ochoa punched in a score from the 2, and with Javier Perez adding the extra point, it was 7-7 with 5:10 left in the first quarter.

The Lions defense put the next score on the board. Burk was pinned deep, and Duke mishandled a snap and then rolled right. Vernon’s Joseph Boone pulled Duke down in the endzone for a safety and a 9-2 lead at the 10:42 mark of the second quarter.

Later in the quarter, Vernon got its first big play score of the season, a 75-yard run from Deveon Willie. Perez kick gave 16-7 lead with 3:31 left in the half.

In what would prove to be a big momentum boost, Burkburnett was able to beat the halftime buzzer, and drive the field for a score. Duke hit Bladen Biner with an 8-yard pass with 19 seconds left in the half and it was 16-14 Vernon ahead at the break.

Burkburnett carried the momentum into the second half, going up 22-16 on a 17-yard pass from Duke to Cayden Blanton in the third quarter; and then 28-16 on a back-breaking 80-yard pass to Biner.

The Lions responded with Jacob Boatman throwing a 39-yard score to Jordan Garcia with 8:31 left in the game, for the final margin of 28-22. 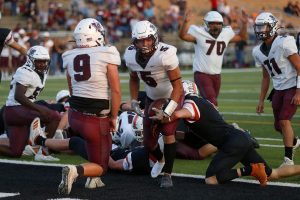 Vernon’s Christian ochoa finds the end zone for the Lions in Friday’s game with Burkburnett.