The National Weather Service is calling for snow across the area, beginning Saturday night — with up to five inches of snow possible in local counties and heavier amounts to the west. 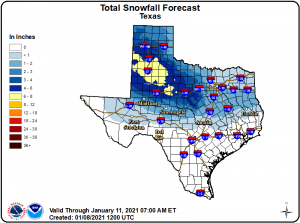 According to NWS forecasters, an upper level low will approach from the southern Rockies late Saturday and Sunday. The NWS reports “Highest snow accumulation potential in our CWA still appears to be confined to portions of our western north Texas counties. Latest iteration of snow totals yield between 3 and 5 inches over a small portion of western north Texas, mainly south and west of a Crowell to Seymour line.”

Accumulations of an inch or two were expanded farther north than previous forecasts, including much of western/southwest Oklahoma into south-central Oklahoma. With the northward trend in data,the  higher snow totals may be seen farther north and east, including Wilbarger County, so stay weather aware.