Iowa Park is the softball team to beat in the region, at least according to the Texas High School Coaches.

The Coaches Preseason  Poll, released Monday, picked the Lady Hawks as the 4A No. 3 team in the state and the favorite to win the district over Vernon, Burkburnett, Graham, Hirschi and Mineral Wells.

The state’s coaches have no love for the Lady Lions, despite the squad returning seven starters from last season — a season which was ended before district play started due to the covid pandemic. That Lady Lion team had already notched wins over four state-ranked teams.

The Lady Lions return  several players with experience of back-to-back state tournament runs in 2017 and 2018 and a district title in 2019. 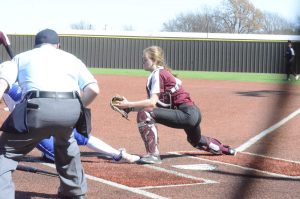 Vernon catcher Addison Spencer defends the plate in a Feb. 27, 2020 softball game in Henrietta. Spencer is one of seven Lady Lion starters returning for the 2021 campaign.
Daniel Walker/Vernon Record

Seniors Emily Boyd and Jaila McBride also earned second team All-District honors in 2019 and were off to strong starts in 2020, before the season ended. Also returning is junior Carli White, who missed last spring with an injury.

Vernon has a new head coach this season — Kirsten Kenyon will take over as the manager and she has a talented group of seniors and juniors to build on.

The season is scheduled to begin February 16 with Vernon hosting Archer City.